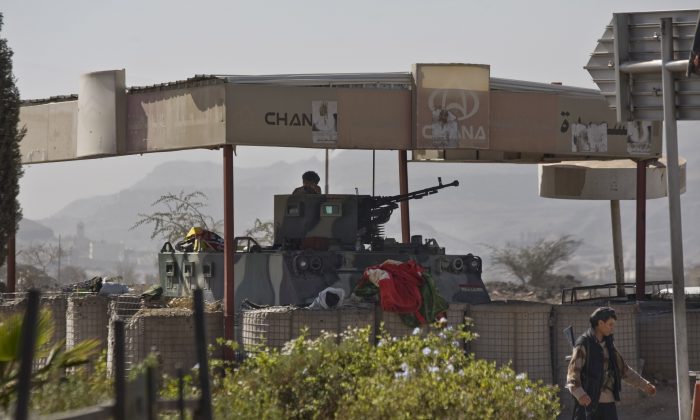 A Houthi Shiite Yemeni, background, mans a machine gun atop an armored personnel carrier, seized from the presidential guards during clashes, outside the presidential palace in Sanaa, Yemen, Thursday, Jan. 22, 2015. (AP Photo/Hani Mohammed)
US

Yemen’s Houthi rebels seized weapons belonging to the U.S. Embassy at the Sanaa Airport on Tuesday night, according to preliminary reports. They also wouldn’t allow U.S. Marines to leave with their weapons.

According to the Wall Street Journal, Yemeni employees at the U.S. Embassy in Sanaa said that embassy officials have burned thousands of documents last night inside the embassy. Weapons inside the storehouse were also destroyed.

An unnamed official told the broadcaster that the Houthis numerous took U.S. Marines’ weapons at the airport.

So what’s going to happen now? The Shiite Houthis likely will have to ally with Iran and Hezbollah.

According to the Brookings Institution, Gulf countries like Saudi Arabia “have the capital to make South Yemen survive. It could be a base for Sunni opposition to the Zaydi-dominated north. The south is also the home to much of Al Qaeda in the Arabian Peninsula (AQAP), which will fight the Saudis for control. An independent South Yemen government could invite foreign forces to help it fight AQAP and the Houthis.”

“Riyadh may simply try to boycott the Houthis. They have already suspended all aid to Sanaa. The UN will back the GCC. The GCC can finance Sunni resistance to the Zaydis. Desperately poor Yemen will face economic disaster without GCC money and remittances from Yemeni workers in the GCC states. Nonetheless, it’s likely that, at a minimum, the Saudis will flirt with supporting southern independence to try to undermine the Houthis.”


It comes as the United States, Britain and France said Wednesday they were closing their embassies in Yemen amid the turmoil in the wake of the Shiite rebels’ takeover of the country.

The closures — almost four years to the date since the start of an Arab Spring uprising that ousted Yemen’s longtime autocratic ruler — were an ominous sign for the faltering, U.N.-brokered negotiations between the Houthi rebels and their political rivals, They also threatened to plunge this impoverished Arabian Peninsula country further into international isolation.

Yemen has been in crisis for months, with the Iran-linked Houthis besieging the capital, Sanaa, and then taking control. In January, the rebels put U.S.-backed President Abed Rabbo Mansour Hadi and all his Cabinet ministers under house arrest, leading to their resignations. Subsequently, the Houthis — who are followers of the Shiite Zaydi sect in the Sunni-majority Yemen — dissolved parliament and declared they were taking over the government.

On Tuesday, the State Department announced it suspended operations at the U.S. Embassy in Sanaa and relocated remaining diplomatic personnel “due to the ongoing political instability and the uncertain security situation.” The embassy had been operating with only a skeleton staff for some weeks amid deteriorating conditions.