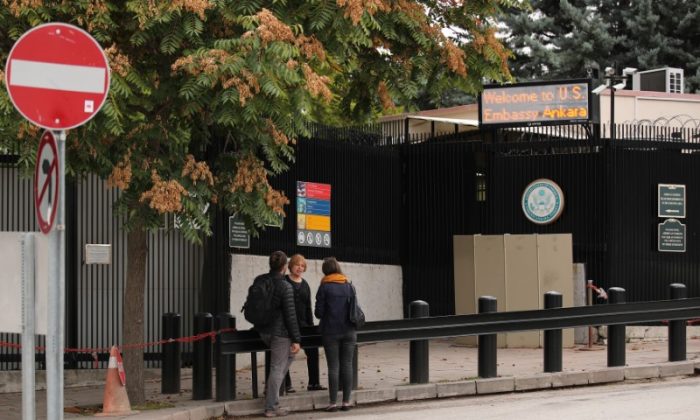 People wait in front of the visa application office entrance of the U.S. Embassy in Ankara, Turkey, Oct. 9, 2017. (Reuters/Umit Bektas)
US News

ISTANBUL—The U.S. embassy in Turkey’s capital Ankara will be closed to the public on Monday due to a security threat and only emergency services will be provided, it said in a statement on Sunday.

The embassy advised U.S. citizens in Turkey to avoid large crowds and the embassy building and to be aware of their own security when visiting popular tourist sites and crowded places.

It did not specify what the security threat was that prompted the closure.

Additional security measures were taken after intelligence from U.S. sources suggested there might be an attack targeting the U.S. embassy or places U.S. citizens were staying, the Ankara governor’s office said in a statement.

Visa interviews and other routine services would be canceled on Monday, the embassy said, adding that it would make an announcement when it was ready to reopen.