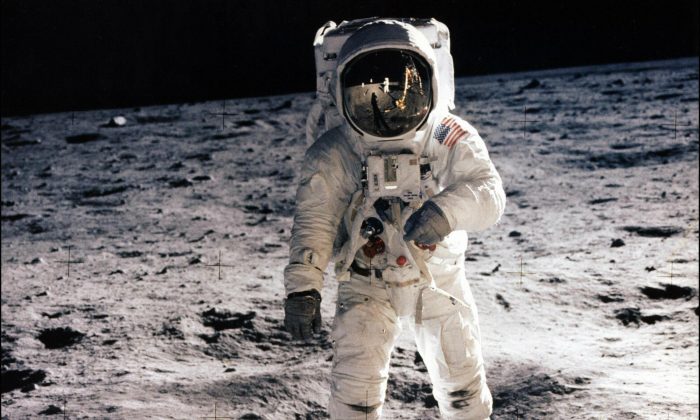 Astronaut Edwin E. Aldrin Jr. at the surface of the moon during the Apollo 11 mission on July 20, 1969. (NASA/AFP/Getty Images)
Business & Economy

Following the end of World War II, the United States dominated global economics. Initially, after the war, the United States was the only significant economy that was not totally in ruins (Germany, Japan, Italy) or deeply damaged by the sacrifices entailed in fighting the war (Great Britain, Russia).

The great U.S. manufacturers were untouched; they had produced awesome amounts of war material (aircraft, vehicles, electronics); these facilities proved rapidly convertible into consumer goods to satisfy pent up American (and global) demand. Simultaneously, U.S. scientific and technical innovation across the economic and cultural spectrum generated an apparently endless flood of benchmark products: commercial television; ocean-spanning passenger aircraft; computers that evolved from “size-of-your-living-room,” vacuum tube-using, primitives to iPhones with greater computing power than those early monsters; and green revolution agriculture virtually feeding the world at some points. Perhaps the zenith of this dominance was placing men on the moon in 1969, little more than a half century after Lindberg’s 1927 solo flight across the Atlantic Ocean.

But steadily this primacy declined. Others developed comparable technological prowess (more than occasionally accelerated by U.S. manufacturers creating factories in these countries to advantage themselves of lower labor costs). And the United States transformed from being the world’s factory to being the world’s greatest consumer—of consumer goods produced outside our borders.

From being the world’s greatest lender, we became the world’s greatest debtor. We developed unparalleled skill in financial manipulations, making Wall Street the home of fiscal instruments, for example, “derivatives,” that no one other than an MBA had a ghost of understanding.

But the “experts” seemed to know what they were doing, everyone was making money, and those speaking of “irrational exuberance” regarding stock prices and mortgage financing were dismissed not quite as fuddy-duddies but not “with it” so far as the 21st century was concerned.

And the “good times rolled” globally—better in some countries than others—but with significant strides in alleviating global poverty and improving social/economic structures.

And then came the 2008 implosion of the U.S. mortgage market and the concurrent failure of multiple “too big to fail” banks. If not forced into bankruptcy, banks were sufficiently damaged that recovery (let alone recovery of consumer confidence) was a long-term process.

Concurrently, the stock market dropped precipitously, and individual investors saw the value of their portfolios collapse as well. Thus the wry comment that “my 401K is now a 201K” coupled with U.S. unemployment rising to double digits. Multiple quarters of negative growth qualified the collapse as a recession, and its depth and duration have dubbed it the Great Recession.

Unsurprisingly, the Great Recession has dominated domestic and global economics for the past seven years, playing a pivotal role in the U.S. 2008, 2010, 2012, and 2014 federal elections. There has been bitter blame-game commentary throughout.

Essentially, there are two schools of thought for getting the United States (and the world) back on track: spend your way out of recession versus hunker down and restrict spending to available income. The liberals/Democrats want to spend—on everything from health care to infrastructure. The conservatives/Republicans want to cut—on everything from taxes to cross-the-board federal spending.

And have we ever spent! The U.S. debt is beyond average citizen comprehension.

But results are indecisive. Economic growth is far below the desired annual 3 percent. Unemployment has fallen, but many “employed” are working at unsatisfactory and/or low-paying positions. Only a quarter of the U.S. population thinks the country is going in the right direction.

The majority think our best times are behind us. They note the vast disparities in incomes between the ‘1 percent’ and ‘the rest.’ When times are good, the disparity is irrelevant; when not, envy and malice come to the fore.

The majority think our best times are behind us. They note the vast disparities in incomes between the “1 percent” and “the rest.” When times are good, the disparity is irrelevant; when not, envy and malice come to the fore. “Tax the rich” (but don’t take away any of my benefits. Cut taxes (which would make the rich even richer) but don’t cut the social safety net, which accounts for much of the national debt.

And infrastructure projects remind the cynical of massive projects such as Boston’s “big dig,” originally costed at $2.8 billion, but with final price estimated to be $22 billion following more than 16 years of work. Corruption anyone?

Somewhere in these years, the “mojo” of U.S. “can do” optimism and drive has evaporated. We are retreating globally; clearly unwilling to sacrifice blood and treasure. This is a been-there-done-that era in which the “tunnel” has no obvious light for its end.

There are no good answers.