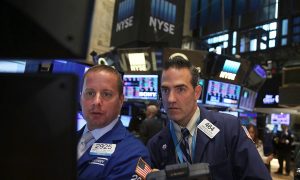 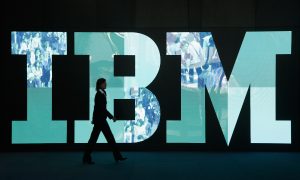 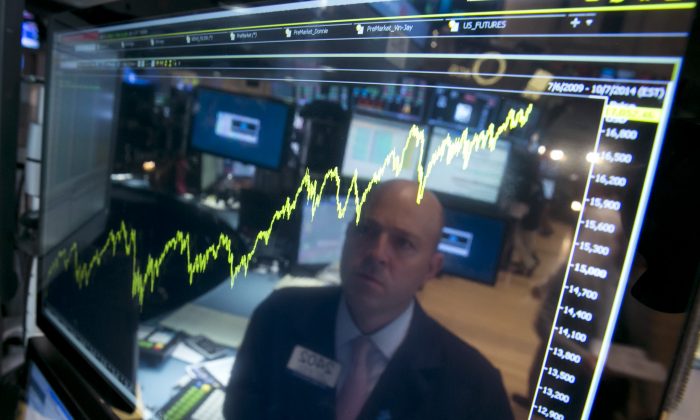 Specialist Jay Woods is reflected in a screen at his post that shows five years of the Dow Jones industrial average, on the floor of the New York Stock Exchange, on July 3, 2014. (AP Photo/Richard Drew)
Business

US Economy Slowed to 1.5 Pct. Growth Rate in 3Q

WASHINGTON—The U.S. economy slowed sharply in the summer, reflecting a cutback in businesses’ stockpiling of goods, which offset solid consumer spending. But most economists think growth has been strengthening since the July-September quarter ended.

The Commerce Department said Thursday that the economy, as measured by the gross domestic product, grew at a tepid annual rate of 1.5 percent in the July-September quarter, far below the 3.9 percent rate of the previous quarter.

The biggest reason was a push by businesses to shrink unwanted stockpiles, which slashed 1.4 percentage points from quarterly growth but is expected to be only temporary. Encouragingly for the economy, consumer spending remained solid over the summer: It rose at a 3.2 percent annual rate, down only slightly from the previous quarter.

And most analysts have said they think businesses are stepping up their stockpiling this quarter in response to the continued gains in consumer spending. Many predict that growth in the October-December quarter will rebound to around a 2.5 percent annual rate.

For all of 2015, the economy is expected to expand around 2.3 percent, near last year’s modest 2.4 percent, despite persistent economic weakness around the world.

Still, last quarter’s slump marked the latest slide for an economy that began 2015 on a rocky note as a severe winter and West Coast port disruptions essentially stalled growth. The economy rebounded in the April-June quarter before weakening again in the summer. The report Thursday was the government’s first of three estimates of growth for the third quarter.

Last quarter, in addition to the drag from reduced inventory rebuilding, a wider trade deficit also held back growth. That weakness is likely continuing as manufacturers struggle with slowdowns in key export markets such as China. A stronger dollar has also hurt sales by making American products less competitive overseas.

Business investment spending grew by a modest 2.1 percent in the third quarter, just half the second-quarter rate. Investment in structures fell at a 4 percent rate. That decline reflected a 47 percent plunge in investment in a category that includes oil and gas drilling, which has suffered huge cutbacks with the drop in global energy prices.

Government spending grew at a moderate 1.7 percent annual rate, slower than the 2.6 percent pace in the second quarter. It reflected a smaller gain in state and local spending.

The 3.2 percent annual rise in consumer spending in the third quarter was only slightly below the 3.6 percent growth rate in the second quarter. Sales of durable goods such as autos led the way.

Consumer spending drives about 70 percent of economic activity, and most economists think that support will continue, boosted by more job gains. Though the pace of hiring weakened over the past two months, steady job growth has helped shrink the unemployment rate to a seven-year low of 5.1 percent.

Wages have yet to rise significantly for most people, but more jobs have meant more people have money to spend.

Most economists expect hiring to pick up in the final stretch of the year and make consumers more likely to spend during the holiday shopping season. A renewed decline in energy prices is also giving consumers more money to spend on other goods and services.

On Wednesday, the Federal Reserve left its benchmark interest rate at a record low near zero. But the Fed signaled that it could raise rates for the first time in nearly a decade when policymakers meet again in December.

The economy will need to further improve, and the Fed will need to feel confident that unusually low inflation will begin moving back toward the Fed’s 2 percent target rate.