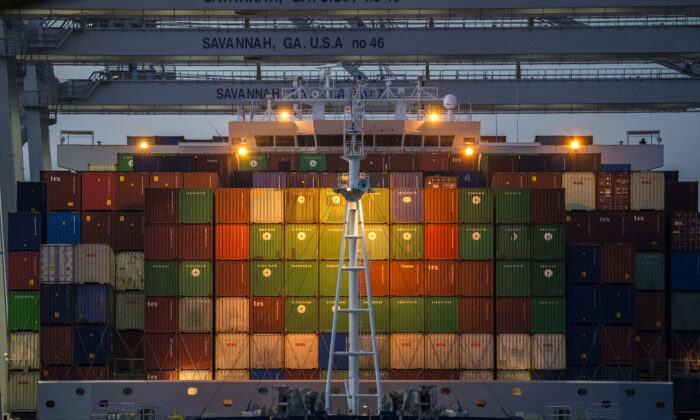 The Federal Reserve Bank of Atlanta cut its forecast for real gross domestic product (GDP) growth in the third quarter, suggesting that the United States is barely expanding and could be on the cusp of contraction.

The U.S. economy is projected to have grown at a seasonally adjusted annual rate of 0.5 percent in the July–September period, according to the Atlanta Fed’s GDPNow model. That’s lower than the projections of 1.2 percent on Oct. 15 and 6 percent from just two months ago.

The next GDPNow update will be released on Oct. 27.

He added that he doesn’t see any relief in the fourth quarter.

Is US Economic Momentum Fading?

This past summer, the Federal Reserve Bank of Philadelphia reported that median forecasts for real GDP growth in the third quarter would be 6.8 percent. But the post-pandemic U.S. economic recovery could be slowing down, based on several latest estimates.

Last week, the Conference Board, a nonprofit business membership and research group organization, projected that U.S. real GDP growth would fall to an annualized rate of 3.5 percent in the third quarter. The group anticipates annual growth will come in at 5.7 percent in 2021, 3.8 percent in 2022, and 3 percent in 2023.

Study authors say that this outlook reflects the intensifying bottlenecks in global supply chains and inflation concerns. The Conference Board believes that consumer spending will be a significant contributor to growth in the fourth quarter.

“The pace of restocking will be slower than previously anticipated as the Delta variant has hindered manufacturing and shipping activity in key economies around the world,” it stated. “Finally, concerns about inflation risks remain high as businesses and consumers continue to grapple with the impact of the pandemic.”

In September, the Organization for Economic Co-operation and Development lowered its U.S. growth forecast. The Paris-based research body trimmed its expectation to 6 percent, from the 6.9 percent projection in May. This represented the first downgrade since December 2020.

“High numbers of infections are still occurring due to the spread of the more transmissible Delta variant, and there are marked differences in the pace of vaccinations and the scope for policy support across countries,” the organization stated. “The Delta variant has so far had a relatively mild economic impact in countries with high vaccination rates, but there are signs that it may weigh on confidence and lower near-term growth momentum.”

In a recent research note to clients, Goldman Sachs determined that growth is slowing, anticipating a 3.25 percent reading in the third quarter, lower than the consensus forecasts of 3.9 percent growth.

Speaking in an interview with Yahoo! Finance Live on Oct. 18, Goldman Chief Economist Jan Hatzius warned that the U.S. economy would endure a continued slowdown next year.

“I would say growth is clearly slowing. Obviously, we are past the peak [growth] rate, but it’s a relatively gradual slowdown,” he said. “As we go through 2022 though, I think we’ll see more of a substantial slowdown because a lot of these near-term forces probably are not very long-lasting. So the second half of the year, I think, will be significantly lower.”

A Wall Street Journal survey of economists suggests that inflation could remain elevated, and short-term growth could be lower heading into 2022.

“Consumer spending, and by extension GDP growth, is being limited by high rates of inflation eroding the real purchasing power of consumers,” Michael Brown, principal U.S. economist at Visa, said in the newspaper’s study.

“It’s not at a point where we’re warning about recession, but it’s at the point where you have to worry about it hurting growth in a material way,” he said.

The U.S. economy could see GDP expansion slowing, following the substantial bounce back from the CCP (Chinese Communist Party) virus-induced meltdown, according to White House projections this past spring. The administration sees GDP growth declining to 2 percent in 2023 and 1.8 percent annually by the mid-2020s.

How Will the Federal Reserve Respond?

In recent months, the U.S. central bank signaled that it would begin tapering its pandemic-era $120-billion-a-month quantitative easing program as early as next month. The Fed has also stated that it will refrain from pulling the trigger on a rate increase until 2023. However, because of persistently higher inflation, a new Reuters poll of economists found that many experts think the Federal Open Market Committee would raise its benchmark overnight lending rate earlier than expected.

“Unfortunately, we doubt supply-chain issues and labor market shortages will be resolved quickly, so inflation will remain elevated through 2022. Given this situation, we expect interest rate rises in September and December next year,” said James Knightley, chief international economist at ING.

A new market sentiment survey by Deutsche Bank showed that many investment professionals expected the Fed and the European Central Bank would leave interest rates low for too long. These institutions have been striking a cautious tone as of late, with officials assuring markets that they are monitoring the buildup of risks, from inflation to employment.