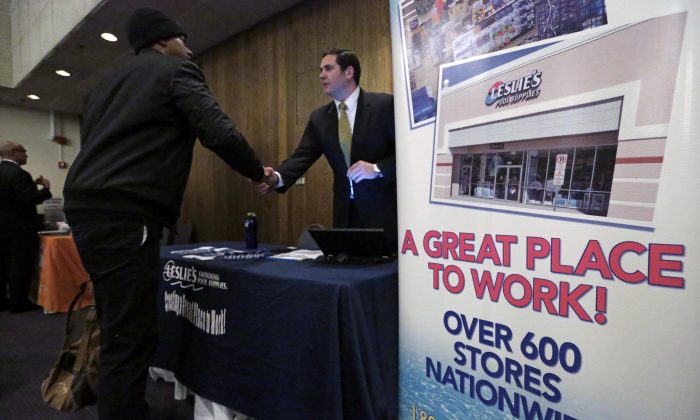 In this April 22, 2015 photo, a sign at a recruiting station for Leslie's Pool supplies boasts that it is a great place to work during a National Career Fairs job fair, in Chicago. (AP Photo/M. Spencer Green)
Business & Markets

US Economy Rebounding With Solid If Unspectacular Job Gains

WASHINGTON—Rebounding from a dismal start to the year, the U.S. economy added 223,000 jobs in April, a solid gain that suggested that employers are helping fuel a durable if still subpar recovery.

The job growth helped lower the unemployment rate to 5.4 percent from 5.5 percent in March, the Labor Department said Friday. That is the lowest rate since May 2008, six months into the Great Recession.

The figures provided some reassurance that the economy is recovering from a harsh winter and other temporary headwinds that likely caused it to shrink in the first three months of the year. Yet the bounce back appears to be falling short of hopes that growth would finally accelerate in 2015 and top 3 percent for the first time in a decade.

Most analysts foresee the economy growing about 2.5 percent this year, similar to the modest expansion typical of much of the 6-year-old recovery.

“Job growth is going from great to good,” said Michael Feroli, an economist at JPMorgan Chase.

Manufacturers barely added jobs for a second straight month. And last year’s plunge in oil prices has led drilling companies to lay off thousands of workers.

Investors breathed a sigh of relief Friday because the figures suggested an economic rebound from the January-March quarter — but one not so explosive as to likely cause the Federal Reserve to raise interest rates from record lows anytime soon. The Dow Jones industrial average soared 267 points to close up 1.5 percent.

The unemployment rate is nearing the level the Fed considers healthy. Yet many other signs suggest that the job market isn’t fully recovered. The number of full-time workers, for example, fell in April while the number of part-timers jumped more than 400,000 to 27.7 million— a half-million more than a year ago.

The increase came from Americans who said they preferred part-time work, the report said. The number of part-timers who want full-time jobs declined 100,000 to 6.6 million. That’s still above pre-recession levels.

The nation’s job growth still isn’t raising worker pay much. Average hourly wages rose just 3 cents in April to $24.87. Wages have risen only 2.2 percent over the past 12 months, roughly the same sluggish pace of the past six years.

“We’re definitely back to that same discussion we were having before March and earlier this year,” said Tara Sinclair, a professor at George Washington University and chief economist at the job listings service Indeed. “Things are looking pretty good and going in the right direction, but where is the wage growth?”

Corey Bowman, U.S. president of Pita Pit, a 240-store sandwich chain, says his company hasn’t had to raise pay even though it’s expanding and hiring. Pita Pit plans to add 45 restaurants this year, with each location creating about 15 full- and part-time jobs.

“I haven’t noticed any change in terms of what you have to pay to get people,” Bowman said.

The Fed has been monitoring the job market for convincing evidence of a healthier economy. The chronically sluggish pay growth and the downward revision to March’s job gain may dissuade the Fed from raising rates in June or even by fall.

Other measures of pay that include bonuses are starting to show healthier increases. That trend could reflect pay gains in skilled industries.

Paul McDonald, a director at job placement firm Robert Half, says companies are offering pay 8 to 10 percent higher than a year ago to attract accountants. They are making generous offers to fill other jobs, such as web developers and computer networking professionals, he said.

“It really is the age of specialization,” McDonald said. “But specialists are hard to find, the demand is so high.”

Still, some higher-paying industries, especially those affected by lower energy prices or the higher dollar, are reporting losses. Mining, which includes oil and gas, cut 15,000 jobs in April. The industry has eliminated 49,000 jobs this year, more than offsetting the 41,000 it added in 2014.

Manufacturers added only 1,000 jobs last month after a flat reading in March. That’s down from the industry’s average monthly job gain of 18,000 last year.

Over the past three months, mining and manufacturing have been subtracting an average of 12,333 jobs a month, said Jay Feldman, U.S. economics director at the bank Credit Suisse.

“I don’t think it’s enough to stop the recovery,” Feldman said. “But it’s big enough that it slows the overall pace.”

Construction companies, though, picked up much of the slack by adding 45,000 jobs, the most in 16 months. That is a sign that cold weather had held back building projects in March, when the construction industry cut 9,000 jobs.