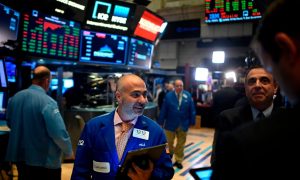 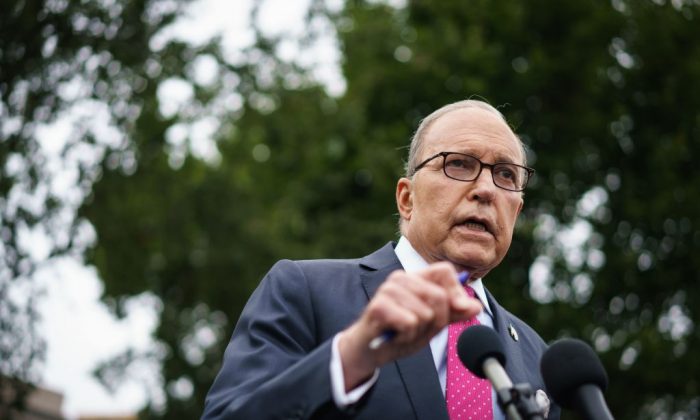 National Economic Council Director Larry Kudlow speaks to reporters outside of the West Wing of the White House in Washington on Sept. 6, 2019. (MANDEL NGAN/AFP/Getty Images)
Politics

US Economy ‘Now on the Upswing’ Despite the Fed, Global Slump: Kudlow

BALTIMORE—White House chief economic adviser Larry Kudlow said Sept. 13 that the U.S. economy is now on the upswing, despite a looming global recession and the Federal Reserve’s tight monetary policy.

U.S. retail sales rose 0.4 percent on a monthly basis in August, beating market expectations, according to a report released by the Commerce Department on Sept. 13. Solid retail data was driven by more-than-expected auto sales and online shopping.

“The core retail sales are growing at about 7.5 percent annualized for the last three months, which gives you a hint of a big Q3 number. That’s a terrific number,” Kudlow told reporters at the 2019 House Republican Conference Member Retreat in Baltimore.

“I think with a global slump and a lot of rate hikes in the Fed, we’ve come through this pretty well, and I think we’re getting better. We’re actually improving. We’re now on the upswing. That’s just my personal view.”

When asked whether the strong retail sales data blunted the case for the Fed rate cuts, Kudlow said, “Not particularly.”

In a recent tweet, President Donald Trump urged the central bank to cut its benchmark rates to zero or below.

“The Federal Reserve should get our interest rates down to ZERO, or less, and we should then start to refinance our debt,” Trump wrote on Sept. 11.

Kudlow defended rate cuts, but didn’t particularly express his opinion on whether it should be cut to zero.

“All I’ll say is we don’t have any inflation,” he said, adding that the “long-term financing rates are the leading indicators, and they’ve come down a percentage point,” supporting the case for rate cuts.

House Republicans gathered for their annual retreat in Baltimore to discuss legislative priorities for next year. Kudlow briefed the Republican members about the economic outlook at a closed-door session.

On U.S.-China trade talks, Kudlow said that the Trump administration is “always available for a good deal” with Beijing.

“There’s some relaxation in the air, with China exempting some tariffs. We’ve returned the favor, and the negotiations are moving along nicely,” he said.

Beijing announced on Sept. 13 that it would lift punitive tariffs imposed on U.S. soybeans and pork.

Chinese trade deputies are expected to come to Washington in mid-September for trade talks before minister-level meetings start in early October.