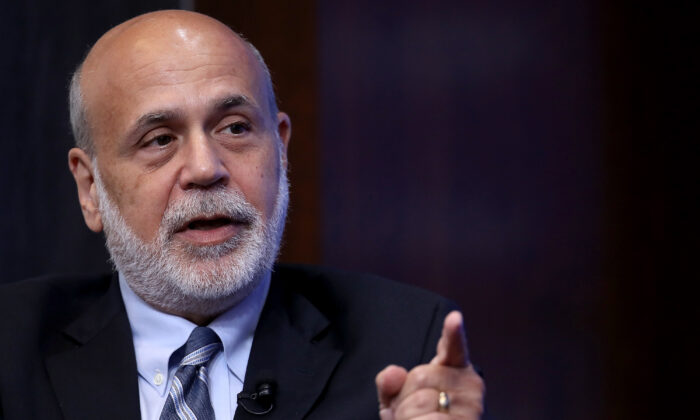 US Economy Has ‘Decent Chance’ of Avoiding Recession but Things ‘Could Go Bad’: Bernanke

Federal Reserve officials have a “decent chance” of avoiding a recession in the United States with a “soft landing,” former Federal Reserve Chair Ben Bernanke said on Sunday.

“A recession is possible. Economists are very bad at predicting recessions, but I think the Fed has a decent chance, a reasonable chance of achieving what [Fed Chair] Jay Powell calls a ‘soft-ish landing;’ either no recession or a very mild recession to bring inflation down,” he added.

Bernanke pointed to a strong labor market in the United States, saying that “with some luck, and if the supply side improves, the Fed can get inflation down without imposing the kind of costs we saw in the early ’80s.”

The former Fed chair also noted that the central bank “knows it is responsible” for inflation and will take the lead in bringing it down, citing its political support from President Joe Biden and lawmakers in Congress.

Bernanke did, however, note that “some things could go wrong” and said he was counting on the supply chain crisis to improve, adding that there is already “some evidence” that it is.

“I’m hoping and guessing that oil and food prices will at least stabilize and preferably begin to moderate,” he said, while acknowledging that “things could go bad” if the above does not go to plan and inflation persists, leading Americans to start losing confidence in the central bank.

“Then the Fed might have to crack down much harder,” Bernanke said.

Bernanke’s comments come as experts have sounded the alarm on a potential full-blown recession in the United States, despite the Biden administration insisting that inflation is a “top economic priority.”

U.S. annual inflation rate surged to 8.6 percent in May, prompting Biden to tell reporters at a White House press briefing on June 10 that his administration will “continue to do everything we can to lower prices for the American people” while calling on Congress to act fast in passing legislation to cut shipping costs and prices for families for things like energy bills and prescription drugs.

In contrast, Goldman Sachs economists said earlier this month that improved inflation figures and adjustments to the jobs market have reduced the risk that the Federal Reserve will have to aggressively raise interest rates to the point that it could force the country into a downturn.