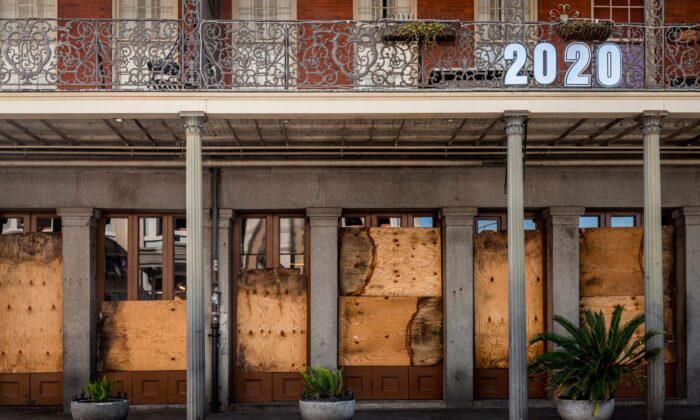 'The decline in first-quarter GDP was, in part, due to the response to the spread of COVID-19,' the Commerce Department said
By Tom Ozimek
Print

The CCP virus outbreak has plunged the U.S. economy into its most severe quarterly contraction since the Great Recession, with the Commerce Department on April 29 announcing that first-quarter output fell by an annualized rate of 4.8 percent.

The dismal GDP number for the January-to-March period of 2020 comes after the economy grew at a 2.1 percent rate in the last three months of 2019. Most of the key components of U.S. economic output—including consumer spending, which accounts for two-thirds of economic activity—fell sharply amid widespread business shutdowns aimed at stemming the spread of the virus.

“The economy is in freefall; we could be approaching something much worse than a deep recession,” said Sung Won Sohn, a business economics professor at Loyola Marymount University in Los Angeles. “It’s premature to talk about a recovery at this moment. We are going to be seeing a lot of bankruptcies for small and medium-sized businesses.”

The Commerce Department partly blamed the pandemic for the dramatic plunge in output.

“The decline in first-quarter GDP was, in part, due to the response to the spread of COVID-19, as governments issued ‘stay-at-home’ orders in March,” the department said in a note. “This led to rapid changes in demand, as businesses and schools switched to remote work or canceled operations, and consumers canceled, restricted, or redirected their spending.”

The department noted that the first-quarter GDP number doesn’t fully reflect the full economic impact of the pandemic because its calculation methods and sources didn’t completely capture the changes in economic activity that took place at the end of the quarter.

While the first-quarter contraction is the steepest since 2009, it’s the year’s second-quarter output that is expected to bear the brunt of the outbreak-driven economic fallout.

White House economic adviser Kevin Hassett said April 27 the U.S. economy could experience its biggest slump since the Great Depression, predicting a second-quarter contraction in output of up to 30 percent.

“You’re looking at something like minus 20 percent to minus 30 percent in the second quarter,” Hassett said on CNBC’s “Squawk Box.”

“It’s going to be the biggest negative number that we’ve seen since the Great Depression,” he said.

Unemployment has surged in the country, with more than 26 million jobs lost in the past five weeks alone, driven by the lockdowns imposed to mitigate the outbreak of the CCP (Chinese Communist Party) virus, commonly known as the novel coronavirus, which emerged from China in 2019.

Hassett believes unemployment could reach between 16 percent and 20 percent in the second quarter, he told CNN on April 28.

The U.S. government has delivered four emergency relief packages, worth some $3 trillion, to prop up the economy amid the outbreak, and talks are in progress on a fifth.

The Federal Reserve has slashed interest rates to near zero and redeployed the broad extent of its crisis-era toolkit to prevent a financial meltdown, with the goal of giving the economy its best chance for a dynamic rebound once the pandemic subsides.

Trump, at a White House event on April 28 said he expects the fourth quarter “to be really strong, and I think next year is going to be a tremendous year.”

“The third quarter is a transition quarter. The second quarter is what it is,” Trump said.