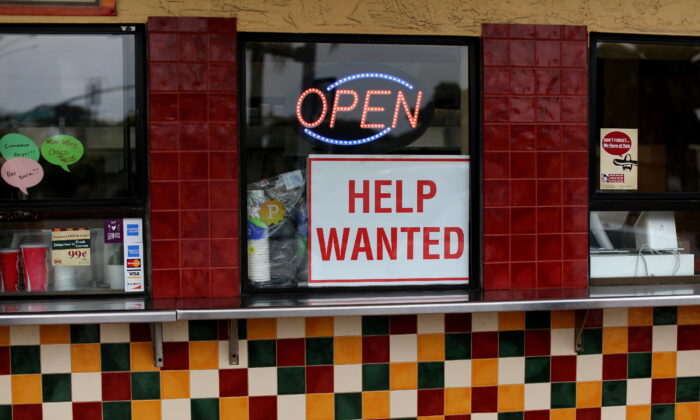 A help wanted sign is posted at a taco stand in Solana Beach, Calif., on July 17, 2017. (Mike Blake/Reuters)
Business & Economy

Wage growth continued to accelerate to 4.9 percent, up from 4.6 percent in September.

Chris Zaccarelli, Chief Investment Officer for Independent Advisor Alliance, said the jobs report is further evidence the economy and the jobs market are moving in the right direction.

“Many people believe—and we would agree—that the Fed would be happy to let the economy run hot, in terms of higher-than-average GDP growth and lower than average unemployment rates, as long as inflation doesn’t become entrenched,” Zaccarelli said.

Cliff Hodge, Chief Investment Officer for Cornerstone Wealth, said the only troubling thing about Friday’s report was that the labor force participation rate did not change from September’s level.

“What’s keeping so many people from coming back into the labor force now we’re seeing trends in COVID cases falling, and the advances of treatments and therapeutics? It’s a bit of a mystery,” Hodge said.

“The release is affirmation that the economy is on the right footing and there exists a possibility that the Santa Claus rally could be one of the strongest in recent memory,” Essele said.

“The slow return of workers back into the labor force should tend to reinforce the idea over at the central bank that the economy should be approaching full employment by the second half of next year as conditions coalesce for a potential kickoff to the inevitable post pandemic policy normalization by the Federal Reserve in late 2022 or early 2023,” Brusuelas said.