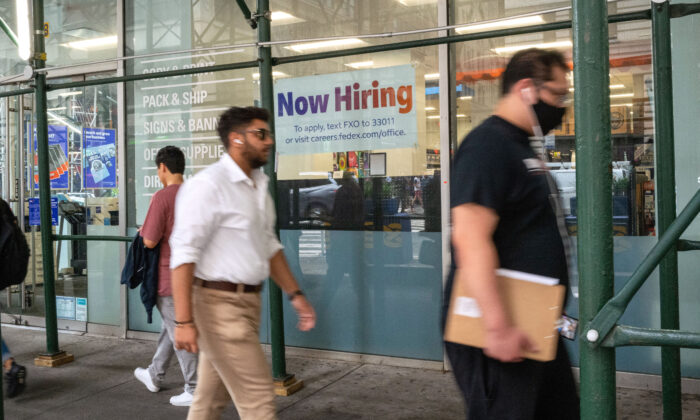 A "now hiring" sign is displayed in a window in Manhattan in New York City on July 28, 2022. (Spencer Platt/Getty Images)
Economy

The unemployment rate dipped to 3.5 percent, down from 3.6 percent in June. The labor force participation rate slipped to 62.1 percent

The number of people not in the labor force but wanting a job was unchanged at 5.9 million. The number of workers employed on a part-time basis for economic reasons surged by 303,000 to 3.9 million. The total number of multiple jobholders increased to 7.572 million, up from 7.013 million at the same time a year ago.

After the strong job numbers were published, the financial markets turned negative in pre-market trading.

The Dow Jones Industrial Average and the Nasdaq Composite Index shed about 100 points, while the S&P 500 slipped 0.7 percent. Investors think that the Federal Reserve will continue raising interest rates as the labor market endures the tightening cycle, observers note.

It could also reopen talks that the central bank could pull the trigger on a 100-basis-point rate hike, says Jan Szilagyi, CEO and co-founder of AI research firm Toggle.

“For the Fed, this means maintaining a very hawkish stance,” he said. “It’s a negative for the market because of the risk of more aggressive tightening, and the prospect that the Fed hasn’t caught up with inflation after all.”

White House press secretary Karine Jean-Pierre told reporters on Thursday that the administration has been expecting lower job numbers as part of a “transition to stable and steady growth.”

“Today, the unemployment rate matches the lowest it’s been in more than 50 years: 3.5%. More people are working than at any point in American history,” he stated.

“And, it’s the result of my economic plan to build the economy from the bottom up and middle out. I ran for president to rebuild the middle class–there’s more work to do, but today’s jobs report shows we are making significant progress for working families.”

Even as the unemployment rate fell back to historically low levels, the labor force participation has not been recovering.

The labor force participation rate, which shows the share of the population that is working or looking for work, remains 1.3 percentage points below the pre-pandemic level of 63.4 percent.

Some economists believe this trend is concerning for the long-term health of the economy. The decline in labor force participation has been driven by several factors, including vaccine mandates and early retirement among baby boomers.

“You would have expected the aging population to lower it 0.4 [percentage points] over that period,” Jason Furman, a Harvard economist and former Obama administration economic adviser wrote on Twitter. “The other 0.9 [percentage points] is not explained by standard demographic changes.”

The unexpected gain in employment in July came as recent key labor market data began to show signs of a slowdown.

In June, the number of job openings declined by 605,000 to 10.7 million, the lowest reading in nine months. It also came in below the market estimate of 11 million and represented the third straight monthly drop. Overall, since hitting a peak of 11.855 million in March, job openings have tumbled about 9 percent.

Last month, U.S. companies announced plans to trim their payrolls by 25,810 jobs, according to new data from Challenger, Gray & Christmas, Inc. This is an increase of 36.3 percent year-over-year and was the second-highest of employment cuts so far this year.

“The job market remains tight, and large-scale layoffs have not begun. There are some indicators that hiring is slowing after months of growth, however,” said Andrew Challenger, Senior Vice President of Challenger, Gray & Christmas, Inc, in a statement.

A recent report from Morning Consult confirmed that 11.7 percent of Americans reported lost income or pay in July, up from 11 percent in June.

“The U.S. labor market remains strong, but its best days may now be in the rearview mirror,” said John Leer, chief economist at Morning Consult, in a statement. “With the Fed raising interest rates aggressively to combat high inflation, businesses are slowing hiring and expansion plans, releasing steam from a red-hot labor market. Whether that slowdown is swift and severe enough to tip the economy into a recession remains to be seen.”

According to fresh Labor Department data (pdf), initial jobless claims climbed to 260,000 in the week ending July 30, slightly higher than economists’ expectations of 259,000. Continuing jobless claims rose to 1.416 million, while the four-week average, which removes week-to-week volatility, edged up 254,750.

Looking ahead, the Federal Reserve’s continued tightening cycle will affect unemployment since it will trim business investments and consumer spending, says Jill Gonzalez, a WalletHub Analyst.

“Since the cost of borrowing will also now be higher, it could also have a direct impact on employees’ personal finances. Combined, it’s not a very good outlook in terms of unemployment numbers in the short term,” she said in a recent report.

The Federal Open Market Committee (FOMC) is widely expected to raise the benchmark fed funds rate by 50 or 75 basis points at next month’s meeting. By the year’s end, the central bank expects to bring interest rates to around 3.4 percent.