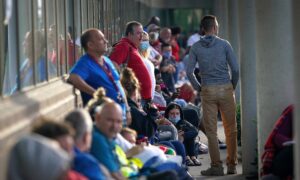 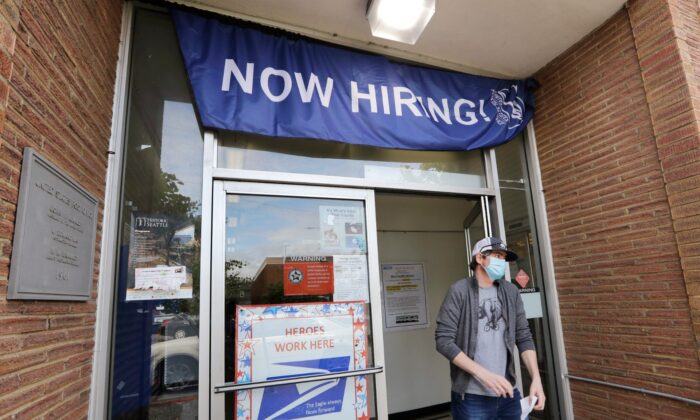 A customer walks out of a U.S. Post Office branch and under a banner advertising a job opening, in Seattle, Wash., on June 4, 2020. (Elaine Thompson/File/AP Photo/)
Economy

The U.S. economy added 49,000 more jobs than it lost in January after shedding a net 227,000 positions in December, suggesting tepid labor market recovery as many pandemic-related restrictions remain in place.

The Labor Department made the announcement in its Friday jobs report, which also showed that the unemployment rate fell from 6.7 percent in December to 6.3 percent in January. About half the drop in the unemployment rate occurred because some of those out of work found jobs, while others stopped looking for work and were no longer counted as unemployed.

December’s drop was the first in eight months and came amid renewed restrictions on businesses to slow a resurgence in COVID-19 infections.

The establishment data portion of the employment report showed that the bulk of the jobs added in January were due to government hiring (43,000), while private sector employers added just 6,000 jobs.

“Our economy is still in a weak position,” said Alfredo Ortiz, President and CEO of the Job Creators Network, a nonprofit, in an emailed statement to The Epoch Times. “Governors and Mayors need to continue reopening the economy and reopen schools.”

The biggest gains in jobs last month were in professional and business services (97,000) and temporary help services (80,900). After gaining 31,000 jobs in December, the manufacturing sector shed 17,000 jobs in January.

Friday’s figures reflect a faltering job market, slowed by a viral pandemic that is still causing consumers to avoid traveling, shopping, dining out, attending entertainment venues, and engaging in other forms of face-to-face contact.

Some states and localities re-imposed restrictions on businesses in December as cases spiked. Some of those restrictions were loosened in January, though perhaps not in time to affect the jobs report, which measures employment in the middle of each month.

As hiring has slowed, many employers have continued to lay off workers. The number of applications for unemployment benefits, though declining for the past few weeks, remained at an elevated 779,000 last week.

The jobs report comes amid talks about another round of pandemic relief, with President Joe Biden pushing Congress to pass a sweeping $1.9 trillion package, while Republicans are calling for targeted aid that would carry a smaller price tag.