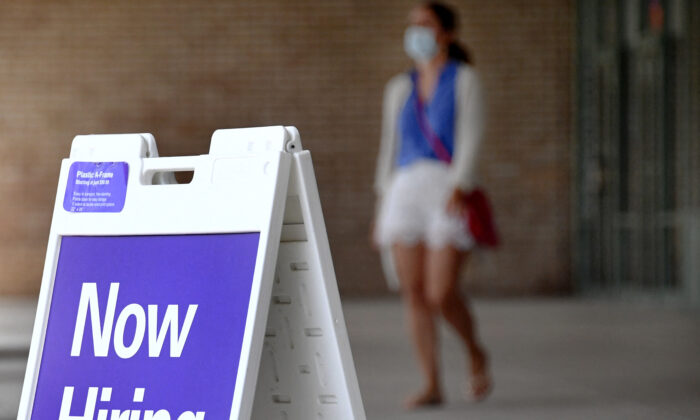 Pedestrians pass a "Now Hiring" sign outside a store in Arlington, Va., on Aug. 16, 2021. (Olivier Douliery/AFP via Getty Images)
Economy

The U.S. economy added 431,000 new jobs in March, falling short of the market estimate of 490,000, according to new data from the Bureau of Labor Statistics (BLS).

That’s a decline from the revised 750,000 positions created in February.

Average weekly hours dipped to 34.6, and the labor force participation rate edged up to 62.4 percent.

“This is no April Fool’s joke. The U.S. labor market is tighter than we thought and getting tighter,” Scott Anderson, chief economist at Bank of the West, wrote in a note.

“The key takeaway from the March jobs report is that the U.S. economy is still barreling toward an overshoot of full-employment at a break-neck pace and the Fed needs to hit the monetary brakes hard if it has any chance of sticking a ‘soft’ landing for this economy. The labor market is giving off ominous signs of overheating and the Fed needs to act as soon as possible to stave off a full-scale meltdown.”

“Businesses are hiring, specifically among the service providers which had the most ground to make up due to early pandemic losses. However, a tight labor supply remains an obstacle for continued growth in consumer-facing industries,” Nela Richardson, chief economist at ADP, said in a statement.

Job openings continue to be near a record high, according to the Bureau of Economic Analysis (BEA).

In February, the number of job openings totaled 11.266 million, higher than market expectations of 11 million. The so-called quit rate also rose to 2.9 percent, meaning that 4.4 million Americans resigned from their positions in February.

U.S.-based companies announced intentions to eliminate more than 21,000 positions from their payrolls last month, the largest number in five months, according to Challenger, Gray and Christmas data.

Although the labor market is forecast to remain robust, job creation could diminish its momentum, according to Bankrate’s First-Quarter Economic Indicator poll.

“During this time of elevated uncertainty, we can extract some comfort from the fact that the U.S. is either close to—or at—full employment,” said Mark Hamrick, Bankrate senior economic analyst and Washington bureau chief. “While less than optimal for employers, that provides a constructive springboard for many individuals and households to derive income and to strive to achieve their financial objectives.”

But the U.S. economy needs greater job creation to reduce the blows from supply shortages and growing inflation pressures, according to Bryce Doty, a senior portfolio manager at Sit Investment Associates.

“Jobs will do more for easing supply shortages and lessening inflation pressure than anything the Fed can achieve by raising interest rates,” Doty told The Epoch Times.

“Rising rates initially simply make buying homes and cars more expensive while also driving up companies’ interest expense, which gets passed onto consumers as price increases. The true underlying issue is there are too few workers providing goods and services for 100 percent of the consuming population.”

Market analysts note that the latest employment report and the upcoming consumer price index (CPI) for March will play critical roles at the Federal Reserve’s next Federal Open Market Committee (FOMC) policy meeting in May.

“A strong NFP print, combined with a strong growth in people’s pay may further boost the Federal Reserve (Fed) hawks, push the short-end of the yield curve higher and weigh on the mood in riskier markets,” Ipek Ozkardeskaya, a senior analyst at Swissquote Bank, wrote in a research note. “While a soft read will hardly revive the Fed doves, as the Fed can’t do many things at a time; it has to fix the rising inflation problem.”

That said, the central bank has been optimistic about the state of the jobs market. At last month’s rate-setting committee meeting, the Fed forecast that the median unemployment rate would hold steady at 3.5 percent in 2022 and 2023.

“The labor market is very strong, and inflation is much too high,” Fed Chair Jerome Powell told the National Association for Business Economics in prepared remarks.

According to the CME FedWatch Tool, most of the market is penciling in a 50-basis-point rate hike next month. The Fed expects six more rate increases this year as part of efforts to curb 40-year high inflation. The size of these rate movements will vary on a wide range of circumstances, including COVID-19, the military conflict in Ukraine, and inflation data. Many officials say they want to move forward on rate increases on a meeting-by-meeting basis.

The personal consumption expenditure (PCE) price index, the institution’s preferred inflation measurement, climbed to 6.4 percent year-over-year in February, up from 6 percent in January.