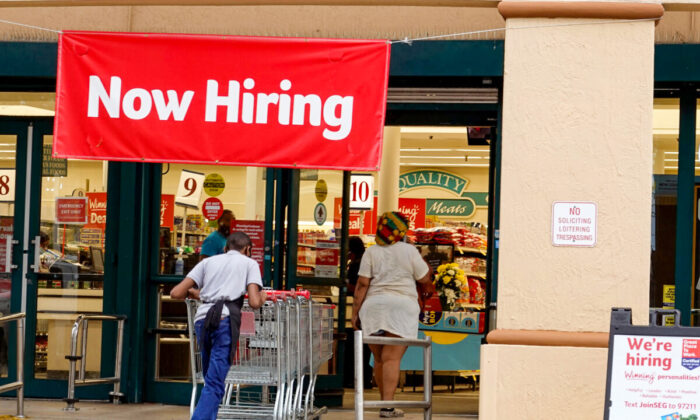 A Now Hiring sign hangs near the entrance to a Winn-Dixie Supermarket in Hallandale, Fla., on Sept. 21, 2021. (Joe Raedle/Getty Images)
Economy

The U.S. economy added 390,000 jobs in May, topping the market estimate of 328,000. Even though employment growth was better than anticipated, it was the slowest since April 2021.

According to data released by the Bureau of Labor Statistics (BLS) on June 3, the unemployment rate remained unchanged at 3.6 percent.

Average weekly hours held at 34.6, while the labor force participation rate rose slightly from a month earlier to 62.3 percent.

Economists forecasted that job growth would slow in coming months.

The May report indicates that the economy is still 822,000 jobs, or 0.5 percent, below its pre-pandemic level.

A major surprise of the report was the loss of 61,000 retail jobs in May, which was led by declines in merchandise stores (minus 33,000), apparel (minus 9,000), and building material and garden supply stores (minus 7,000). Despite job losses, retail employment remains 159,000 over its pre-pandemic level.

Employment in leisure and hospitality increased by 84,000, with food services and accommodation accounting for most of the increase. That’s still 1.3 million jobs or 7.9 percent below February 2020 levels.

Business and professional services added 75,000 jobs, which is 821,000 higher than before the coronavirus pandemic, while transportation and warehousing jobs increased by 47,000, which is 709,000 positions above its pre-crisis level.

In May, the BLS survey found that 1.8 million people couldn’t work because their employer shut down or went out of business because of the pandemic.

This comes after ADP reported that private businesses hired 128,000 employees in May, the smallest number in more than two years. The figure was also below the market estimate of 300,000.

“Under a backdrop of a tight labor market and elevated inflation, monthly job gains are closer to pre-pandemic levels. The job growth rate of hiring has tempered across all industries, while small businesses remain a source of concern as they struggle to keep up with larger firms that have been booming as of late,” Nela Richardson, ADP chief economist, said in a statement.

In other labor market data last week, the number of job openings eased to 11.4 million in April, down from 11.9 million in the previous month, according to the BLS data. Despite a slight decline, job openings remain around all-time highs.

The number of Americans submitting their resignation letters also tumbled to 4.42 million in April, down from 4.45 million in March. The quits rate held steady at 2.9 percent.

At the same time, labor productivity plummeted by 7.3 percent, slightly better than the previous figure of 7.5 percent. Still, this represented the sharpest pullback in quarterly productivity since the July-to-September period of 1947.

In recent months, the debate unfolding in economic circles and on Wall Street is how the Federal Reserve’s tightening of monetary policy will affect the U.S. economy.

Now that the central bank is on a path of raising the neutral Fed funds rate to around 2.5 percent by the end of the year, many economists question if this will douse the red-hot labor market and derail growth.

Typically, when interest rates are on an upward trajectory, consumer spending and business investments take a hit. This inevitably leads to a reduction in hiring and a jump in unemployment.

But even if higher rates halt employment gains, Fed Chair Jerome Powell told The Wall Street Journal last month that the labor market could withstand it, considering how hot it has been on the other side of the pandemic.

“We will go until we feel we’re at a place where we can say financial conditions are in an appropriate place, we see inflation coming down. We’ll go to that point. There won’t be any hesitation about that,” Powell said. “You’d still have a strong labor market if unemployment were to move up a few ticks. I would say there are a number of plausible paths to have a soft, as I said, softish landing. Our job isn’t to handicap the odds, it’s to try to achieve that.”

Other Fed officials agree with this assessment, including Fed Governor Christopher Waller.

Speaking at the Institute for Monetary and Financial Stability (IMFS) in Frankfurt, Germany, on May 30, Waller noted that the jobless rate will increase in the aftermath of steep rate increases, but not by much.

“The unemployment rate will increase, but only somewhat because labor demand is still strong—just not as strong—and because when the labor market is very tight, as it is now, vacancies generate relatively few hires,” Waller stated. “Thus, reducing vacancies from an extremely high level to a lower—but still strong—level has a relatively limited effect on hiring and on unemployment.”

“So, the Fed will certainly not change its mind on the soft jobs data,” she wrote in a research note. “Fed Vice Chair Lael Brainard has been clear that the Fed is unlikely to stop raising rates after the two 50bp hikes expected in the next two FOMC meetings. The era when the Fed threw money to the market to boost jobs is behind.”

When the rate-setting Federal Open Market Committee (FOMC) meets later this month, it’s widely anticipated that the central bank will pull the trigger on another half-point increase.