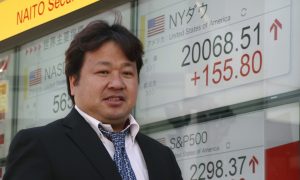 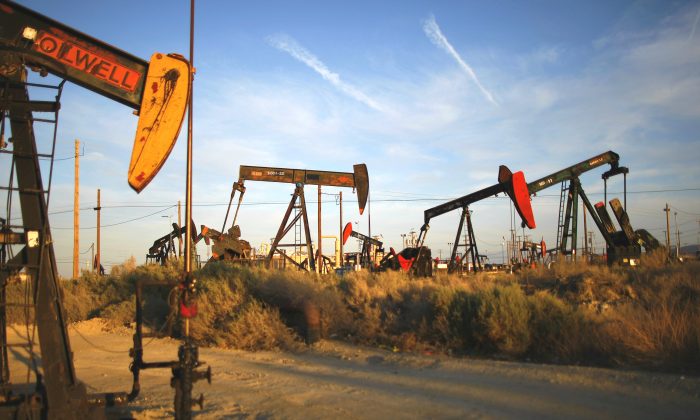 Pump jacks and wells are seen in an oil field on the Monterey Shale formation with gas and oil extraction using hydraulic fracturing, or fracking, on the verge of a boom, near McKittrick, Calif., on March 23, 2014. (David McNew/Getty Images)
US

US Economic Growth Slowed to 1.9 Percent Rate in Fourth Quarter

WASHINGTON—The U.S. economy lost momentum in the final three months of 2016, closing out a year in which growth turned in the weakest performance in five years.

The gross domestic product grew at an annual rate of just 1.9 percent in the October-December period, a slowdown from 3.5 percent growth in the third quarter, the Commerce Department reported Friday. GDP, the broadest measure of economic health, was held back by a jump in the trade deficit.

Private economists believe sustained annual growth rates of 4 percent will be a high hurdle to achieve given underlying trends such as slow growth in the labor market and weak productivity. However, many analysts have been boosting their forecasts believing that Trump will succeed in getting at least a portion of his program approved by a Republican-led Congress.

For the fourth quarter, the biggest factor contributing to the slowdown was a widening in the trade deficit. Exports, which had been temporarily bolstered by a surge in sales of soybeans to Latin America, retreated in the fourth quarter. Meanwhile, imports surged.

Paul Ashworth, chief U.S. economist at Capital Economics, said the slowdown in fourth quarter growth was not a cause for concern since the third and fourth quarter performances were heavily influenced by a temporary swing in exports.

“We would be wary of reading too much into the slowdown in GDP growth … because the temporary spike in soybean exports boosted” the third quarter and subtracted from the fourth quarter, he said.

Consumer spending, which accounts for 70 percent of economic growth, slowed to still-solid growth of 2.5 percent in the fourth quarter from a 3 percent gain in the third quarter. But business investment spending accelerated in the fourth quarter, rising at a 2.4 percent rate, the best showing in more than a year. That’s a hopeful sign that a prolonged slowdown in investment spending, reflecting in part big cuts by energy companies, is coming to an end.

Residential construction, which had been falling for two quarters, rebounded in the fourth quarter, rising at an annual rate of 10.2 percent while government spending grew at a 1.2 percent rate as strength in state and local activity offset a drop in activity at the federal level.

Rebuilding of business stockpiles added 1 percentage point to growth in the fourth quarter. The cutbacks in business investment along with efforts by companies to reduce an overhang of unwanted inventories were major reasons growth slowed in 2016.

Economists are forecasting a better performance in 2017, with many raising their forecasts to incorporate the potential impact of Trump’s stimulus program. They believe that the prolonged reduction in stockpiles has run its course and business spending on new plants and equipment will begin to rebound.

Economists at the International Monetary Fund last week boosted their outlook for U.S. GDP to 2.3 percent this year and 2.5 percent in 2018, saying the increase reflected expectations that Trump’s economic program of tax cuts, regulatory relief and higher infrastructure had boosted growth prospects.

GOP Leaders: Bill to Build Wall Will Cost up to $15 Billion

Some private economists are even more optimistic. Stuart Hoffman, chief economist at PNC, said he had pushed his outlook up to growth of 2.4 percent in 2017 and 2.7 percent in 2018.

Sung Won Sohn, an economics professor at California State’s Martin Smith School of Business, said there is a lot of uncertainty at the moment about Trump’s program since the new administration has yet to put forward its plan for Congress to consider.

“At the moment, we don’t know the size, the scale and the timing of the Trump program,” Sohn said. “But it is very possible that we will get a significant boost to economic growth in the second half of next year if Trump is successful getting his program through Congress.”

Sohn predicted growth rates could jump to 3.5 to 4 percent. GDP growth has averaged a lackluster 2.1 percent in the 7½ years since the recession ended, a point that Trump repeatedly brought up during the campaign.