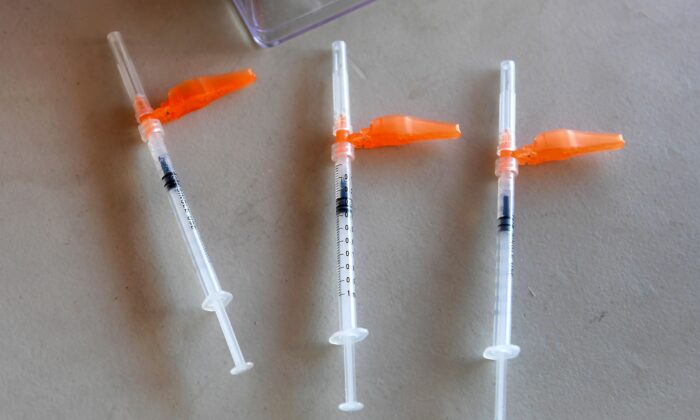 Syringes with the COVID-19 Pfizer vaccine are pictured ready for use at a mobile clinic in Los Angeles, Calif., on July 9, 2021. (Frederic J. Brown/AFP via Getty Images)
Vaccines & Safety

A review of Pfizer’s request for approval of its COVID-19 vaccine will likely be completed by January 2022, U.S. drug regulators announced Friday.

The U.S. Food and Drug Administration (FDA) agreed to make the request a priority.

FDA officials in December 2020 granted emergency use authorization to COVID-19 jabs from Pfizer and Moderna. The only other shot that has since been authorized for use in the United States is one from Johnson & Johnson.

All three companies have asked for or intend to ask for full approval, which requires more data and a more thorough review.

Dr. Janet Woodcock, the acting commissioner of food and drugs for the FDA, said regulators are targeting January 2022 to be done with the review, but the target “does not mean approval will not happen before that time.”

“Quite to the contrary, the review of this BLA has been ongoing, is among the highest priorities of the agency, and the agency intends to complete the review far in advance” of that target date, she said in a statement.

Pfizer is the most commonly used COVID-19 shot in the nation. Nearly 187 million doses have been administered as of Friday, versus 136 million Moderna doses and just 12.9 million Johnson & Johnson doses.

Pfizer’s jab is the only one authorized for use in children between the ages of 12 and 17. Moderna last month asked the FDA for authorization for that age group, after a trial showed it was 100 percent effective in the population.

Moderna in June also requested full approval for the jab.

Nearly half of the total U.S. population is fully vaccinated against the CCP virus, but U.S. officials have continued aggressively pushing the vaccines, alleging they’re the only way to guarantee protection against the disease.

Dr. Rochelle Walensky, the head of the Centers for Disease Control and Prevention (CDC), told reporters in a virtual briefing earlier Thursday that data show “this is becoming a pandemic of the unvaccinated.”

“We are seeing outbreaks of cases in parts of the country that have low vaccination coverage because unvaccinated people are at risk. And communities that are fully vaccinated are generally faring well,” she said.

The CDC has not responded to a request for data backing up the narrative, which Walensky has promoted in multiple recent appearances.

Critics note that people who contract COVID-19 and recover enjoy lasting immunity, a fact downplayed by the FDA and the CDC.

The development on Pfizer’s request came about a week after the company announced it would ask the FDA to authorize a booster dose of its vaccine, alleging that people face a risk of reinfection six months after receiving the original two-dose regimen. However, both the FDA and the health centers said such a booster is not needed at this time.

After a meeting this week involving U.S. officials and Pfizer employees, Surgeon General Vivek Murthy said it’s “very possible” a booster will be needed, even as a health official said boosters could increase the risk of serious side effects.