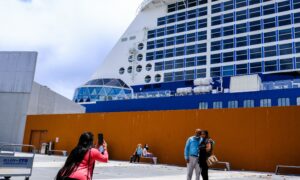 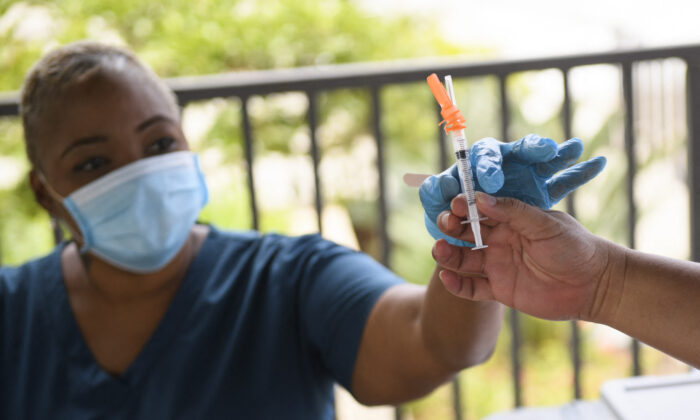 A nurse is handed a dose of the Pfizer COVID-19 vaccine before administering it to a college student at a mobile vaccination clinic at the California State University–Long Beach campus in California on Aug. 11, 2021. (Patrick T. Fallon/AFP via Getty Images)
Vaccines & Safety

U.S. drug regulators on Aug. 23 approved a new COVID-19 vaccine from Pfizer and BioNTech for people 16 and older, making it the first such shot to receive full approval in the country.

The approval is only for doses produced in the future, according to FDA documents. Existing supply will continue to be administered under an updated emergency use authorization (EUA).

The trial continues in centers in six different countries, including the United States, and the data cited was gathered through March 13. Participants received either two doses of Pfizer’s shot or a placebo.

“As the first FDA-approved COVID-19 vaccine, the public can be very confident that this vaccine meets the high standards for safety, effectiveness, and manufacturing quality the FDA requires of an approved product,” Dr. Janet Woodcock, the FDA’s acting commissioner, said in a statement.

“While millions of people have already safely received COVID-19 vaccines, we recognize that for some, the FDA approval of a vaccine may now instill additional confidence to get vaccinated. Today’s milestone puts us one step closer to altering the course of this pandemic in the U.S.”

The FDA issued emergency use authorization to the Pfizer shot and a COVID-19 vaccine from Moderna in December 2020. Several months later, regulators authorized a shot from Johnson & Johnson. But none until Aug. 23 had received approval, which has a higher bar than authorization.

The approval “affirms the efficacy and safety profile of our vaccine at a time when it is urgently needed,” Pfizer CEO Albert Bourla said in an emailed statement. “I am hopeful this approval will help increase confidence in our vaccine, as vaccination remains the best tool we have to help protect lives and achieve herd immunity.”

The decision will likely lead to new vaccine mandates, as some officials have held off imposing vaccine requirements due to the lack of an approved vaccine.

Approximately 201.4 million Americans have received at least one COVID-19 vaccine dose as of Aug. 22, according to federal data. More than 204 million Pfizer doses have been administered.

The approval comes as studies show that the efficacy of vaccines in preventing CCP virus infection is waning. That prompted a host of officials, including the FDA’s Woodcock, to announce last week that they plan, starting next month, to recommend booster shots, pending FDA authorization. Still, for now, those who get two Moderna or Pfizer shots are considered fully vaccinated.

The approval drew both support and criticism.

President Joe Biden said in a statement that the approval “should give added confidence that this vaccine is safe and effective.”

However, Peter Doshi, senior editor of the British Medical Journal, said on Aug. 23 that the FDA should have demanded “controlled studies with long-term follow-up” before granting the approval.

While the Delta variant of the CCP virus has been blamed for the vaccine’s waning effectiveness, he wrote, that may not be the true cause, since there hasn’t been enough time yet to properly study the data.

While the FDA approved Pfizer’s shot, regulators also said they determined that there are “increased risks” of myocarditis and pericarditis, or heart inflammation, following administration, particularly within the seven days following the second dose of the two-dose regimen.

“The observed risk is higher among males under 40 years of age compared to females and older males. The observed risk is highest in males 12 through 17 years of age. Available data from short-term follow-up suggest that most individuals have had resolution of symptoms. However, some individuals required intensive care support. Information is not yet available about potential long-term health outcomes. The Comirnaty Prescribing Information (pdf) includes a warning about these risks,” the agency said.

The FDA previously added a warning about the heart inflammation to both the Pfizer and Moderna vaccines, which both utilize messenger RNA technology, but maintains that teenagers should still get vaccinated.

In the clinical trial that the FDA reviewed, approximately 58 percent of the participants were monitored for four or more months following their second dose. About a third of those who received the vaccine from that subset reported adverse events.

The most common side effect was pain at the injection site, followed by fatigue and headache. Some participants, 108 who got the vaccine and 151 who got a single vaccine dose or the placebo, reported that serious adverse events occurred, including Bell’s palsy (facial paralysis).

“In the analysis of blinded, placebo-controlled follow-up, there were no notable patterns between treatment groups for specific categories of serious adverse events (including neurologic, neuro-inflammatory, and thrombotic events) that would suggest a causal relationship to Comirnaty,” the FDA said in an approval document (pdf).

Approximately 3,079 people have died after receiving the Pfizer jab, according to the Vaccine Adverse Event Reporting System (VAERS), a passive reporting system run jointly by the FDA and the Centers for Disease Control and Prevention. Some 15,268 people have been hospitalized after getting a Pfizer shot, according to VAERS reports. Nearly 3,900 have reportedly suffered a permanent disability.

The system is “not designed to determine if a vaccine caused a health problem, but is especially useful for detecting unusual or unexpected patterns of adverse event reporting that might indicate a possible safety problem with a vaccine,” according to its website.

Anybody can submit reports to the system. Health care providers are encouraged to submit reports, and vaccine manufacturers are required to report certain adverse events. Federal health officials then review the submissions.

Correction: The article has been updated to clarify that future vaccines produced under the name Comirnaty are fully approved, not current Pfizer vaccines.