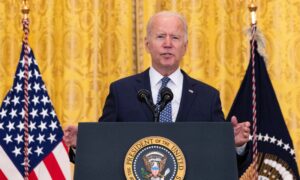 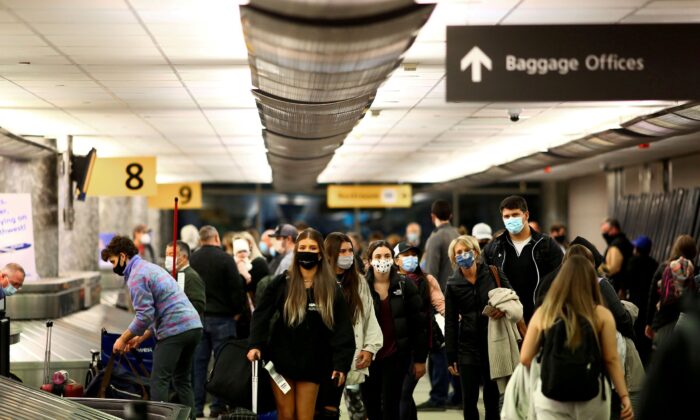 Travelers reclaim their luggage at the airport in Denver on Nov. 24, 2020. (Kevin Mohatt/Reuters)
Executive Branch

US Doubles Fines for Violators of Mask Mandate at Airports, on Trains

President Joe Biden’s administration on Sept. 9 doubled the fines for people who are caught violating the federal mask mandate in effect at airports and on some modes of public transportation.

The mask mandate is in effect at airports, on airplanes, and in other modes of public transportation, such as buses.

“Wearing a mask protects the traveling public and all of the personnel who make the travel experience safe, secure, and comfortable,” Secretary of Homeland Security Alejandro Mayorkas said in a statement. “We will continue to enforce the mask mandate as long as necessary to protect public health and safety.”

“We appreciate the majority of travelers each day who voluntarily follow the requirement, but find this action necessary to maximize the protections for those who use and work within the transportation system, and to contain COVID-19,” added David Pekoske, administrator of the Transportation Security Administration. “By doubling the range of penalties, we seek to reinforce the importance of voluntary adherence.”

Biden directed the Department of Homeland Security, which includes the administration, to double the fines as part of a fresh plan to try to curb the Delta variant of the CCP (Chinese Communist Party) virus.

While campaigning last year, Biden promised he would stop the virus when he entered office. Instead, cases, hospitalizations, and deaths jumped over the summer, though they’re on the decline in some states.

Experts blame the Delta variant, which has been described as more transmissible than other variants, and which vaccines aren’t able to mitigate as well as previous strains.

Biden also announced new CCP virus vaccine mandates, including for companies that have more than 100 employers.