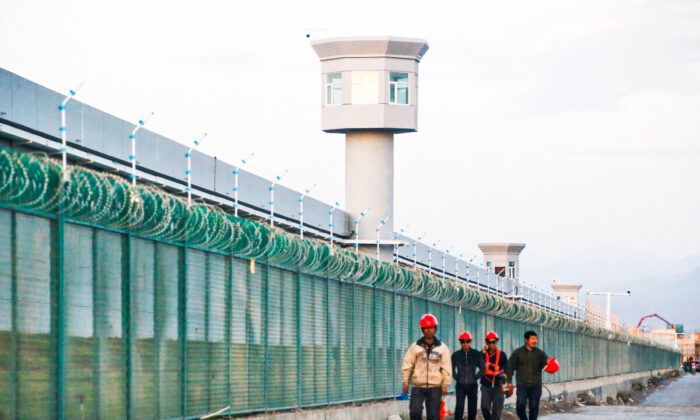 Workers walk by the perimeter fence of what is officially known as a vocational skills education center in Dabancheng, Xinjiang Province, China, on Sept. 4, 2018. (Thomas Peter/Reuters)
Investment

US Dollars Continue to Flow to China’s Genocide

Socially responsible funds have gained a lot of attention in recent years but millions of Americans still own stocks of companies that are tied to genocidal regimes and have no idea how to spot them in their investment portfolios.

Fund management firms don’t provide enough transparency to their customers about their holdings, according to human rights advocates, therefore most investors don’t know whether their portfolios are free of companies that substantially contribute to genocide or crimes against humanity.

The Trump administration in January declared the Chinese regime’s treatment of Uyghurs and other ethnic Muslim minorities in the far western Xinjiang region a genocide, a position endorsed by the Biden administration. Several countries’ legislatures have also followed suit, including Canada, the Netherlands, and the UK.

The U.S. government has also placed sanctions on Chinese officials and entities over its repression of Uyghurs, and other groups, including Hongkongers, and Falun Gong adherents.

Meanwhile, investment management funds in the United States and around the world hold shares of Chinese companies that support the Communist regime’s military and security apparatuses, and aid its human rights abuses.

To address this loophole, President Joe Biden signed an executive order in June, continuing a Trump-era rule, that prohibits U.S. investors from investing in Chinese companies with ties to Beijing’s military. Both Biden and former President Trump declared a national emergency to tackle the security threats posed by these companies.

“I have determined that it is necessary to continue the national emergency,” Biden said on Nov. 9, in an announcement extending the investment ban.

“The PRC [People’s Republic of China] is increasingly exploiting United States capital to resource and to enable the development and modernization of its military, intelligence, and other security apparatuses,” Biden continued.

While these measures are monumental, the U.S. government has been slow in responding to the growing threat posed by the communist regime, according to China hawks in Washington.

“Policy response hasn’t been as robust as one would expect,” Bill Browder, a hedge fund manager and human rights activist, said at this year’s China Forum.

Because the U.S. government “wants to rock the boat as little as possible for fear of economic backlash,” Browder said.

The Treasury’s investment ban list so far includes 59 companies that are operating in the defense and surveillance technology sectors. Americans are barred from investing in stocks or bonds of these firms.

While denying Chinese firms access to the U.S. capital markets is an important step, the ban list itself is not extensive.

In June, the administration tasked the Treasury Department with updating the list. However, the Treasury has failed to add new companies, even though there are many more entities that threaten U.S. national security, according to critics.

For example, there are over 400 Chinese entities in the Commerce Department’s “entity list,” which bars exports of U.S. technology to these firms without a license. Those entities were added due to national security concerns or over their role in facilitating Beijing’s rights abuses.

Only less than 1 percent of these companies has ended up on Treasury’s investment ban list, Roger Robinson, former chairman of the congressional U.S.-China Economic and Security Review Commission, said at the China Forum.

In June, the administration added five China-based solar companies to the entity list for participating in Beijing’s forced labor campaign against Uyghurs in Xinjiang. Two of them, Hoshine Silicon Industry and Xinjiang Daqo New Energy, are publicly traded and could be held by major indexes and investment funds.

Critics also question the scope of the entity list as there are many small Chinese companies that go unnoticed.

A new report by the Center for Security and Emerging Technology (CSET) at Georgetown University found that nearly 91 percent of AI equipment suppliers to the Chinese military weren’t on the entity list.

“We’re talking about 5,000 Chinese companies in the portfolios of roughly 150 million Americans,” Robinson said, referring to all Chinese stocks trading in the United States or other exchanges around the world, as well as over-the-counter markets.

And the American investors don’t know how many of these companies are human rights violators or national security abusers, he noted.

Meanwhile, the U.S. Congress is working on a measure to remove non-compliant Chinese companies from American exchanges starting in 2022. The bill, Accelerating Holding Foreign Companies Accountable Act, that passed the Senate unanimously in June is expected to move through the House soon.

The bill is a follow-up to the Holding Foreign Companies Accountable Act, which was signed into law by Trump last December. Under this law, foreign companies that fail to comply with the Public Company Accounting Oversight Board’s (PCAOB’s) audits for three consecutive years will be subject to delisting from U.S. exchanges.

U.S. regulators, including the PCAOB, have been unable to inspect audit papers of China-based companies, as Beijing has refused to allow inspections, citing national security and privacy reasons.

The follow-up bill sponsored by Sen. John Kennedy (R-La.) seeks to put more pressure on Chinese companies, requiring them to comply with U.S. audit standards within two consecutive years instead of three.

By passing the bipartisan bill, “congress can continue to protect investors, the integrity of our markets, and our national security,” he said.