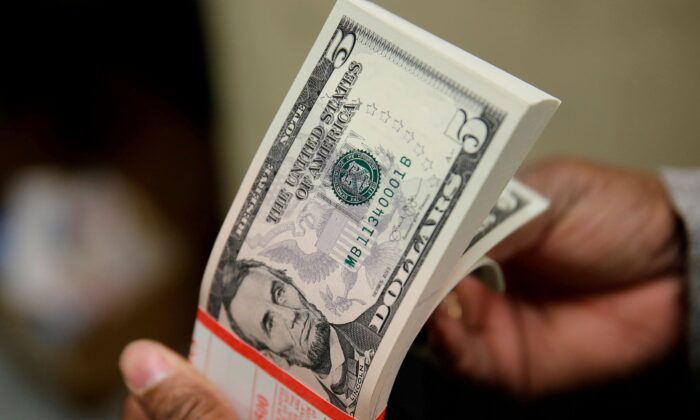 US Dollar Net Longs Jump to Highest Since Mid-June 2019: CFTC

NEW YORK—Speculators’ net long positioning on the U.S. dollar in the latest week soared to its highest level since mid-June 2019, according to calculations by Reuters and U.S. Commodity Futures Trading Commission data released on Friday.

The value of the net long dollar position was $23.99 billion for the week ended Nov. 30, up from net longs of $22.11 billion in the previous week. U.S. dollar net long positioning rose for a second straight week.

In a broader measure of dollar positioning, which includes net contracts on the New Zealand dollar, Mexican peso, Brazilian real and Russian rouble, the greenback posted a net long position of $24.435 billion this week, from $21.964 billion in the prior week.

“Against all the currencies covered in this report, only the yen saw an improvement in its position against the dollar as investors likely turned to its safety amid heightened risk aversion with the spread of the Omicron COVID-19 variant,” said Scotiabank in its report after the release of the CFTC data.

Net shorts on the Japanese yen declined to 78,866 contracts this week.

In remarks before Congress, Fed’s Powell said the risk of inflation had increased and suggested retiring the term “transitory” to describe the surge in prices. He also pushed for accelerating the tapering of Fed asset purchases.

Jane Foley, head of FX strategy, at Rabobank in London, said it would be difficult for the dollar to post further gains.

“Although Powell’s hawkish tone this week brought back the risk that the Fed could hike rates twice next year, the market is already priced for this,” she added.

In cryptocurrencies, bitcoin futures’ net short positions ballooned to 1,691 contracts, after falling as low as 160 contracts last week, the smallest since mid-January 2019.

As with many risk assets, bitcoin has been affected by worries about the Omicron variant.

Since its all-time high of $69,000 hit on Nov. 10, bitcoin has dropped more than 25 percent, with some market participants suggesting that the world’s largest cryptocurrency has entered a bear market.