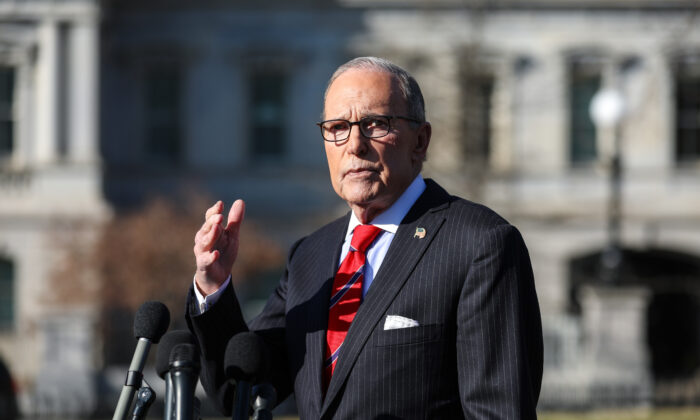 In his sharpest criticism of China to date over the response to the virus, Kudlow said the United States hasn’t received enough information from Chinese Communist Party officials about what’s happening.

“I wish we did know more. You know, this should not be about politics or for that matter, trade. This is just plain, ordinary health, public health, to help people,” Kudlow told reporters at the White House in Washington.

Official numbers from China purportedly showed a decline in cases before a significant spike was reported overnight. Many experts believe the communist regime is underreporting the true number of cases.

“We thought they were tailing off in their head count. It turns out that that might not be the case,” Kudlow said. Kudlow, President Donald Trump, and other officials are engaging with Chinese officials on the situation. Trump praised China in an unrelated event earlier this week.

“We have very good trade deal with them and so forth. But, on this particular matter, we are quite disappointed in China’s response,” said Kudlow, the National Economic Council director.

China still hasn’t accepted an offer from the United States to send a team of experts from the Centers for Disease Control and Prevention (CDC) to assist in the response to the virus, Kudlow said.

U.S. health officials have repeatedly talked about the offer to China. Weeks have gone by without China accepting the offer, the officials have said, save for one statement last week.

In that statement, White House spokesman Judd Deere said that China decided to let American experts join a World Health Organization (WHO) delegation to help work in the coronavirus outbreak. Deere didn’t respond to a request for clarification.

WHO’s advance team landed in China on Monday and Dr. Mike Ryan, a WHO official, said the rest of the team, estimated at 7 to 12 people, would land over the weekend.

WHO officials have declined to say where the team will go or what they will study.

“We don’t want to tell them what to do,” Dr. Tedros Adhanom Ghebreyesus, director-general of WHO, told reporters at a press conference on Monday. “We want them to be really free, empowered, and really see things for themselves.”

Only two experts have been named publicly: Dr. Bruce Aylward, a Canadian doctor heading the advance team; and Dr. Maria Van Kerkhove, a WHO official who was also part of the advance team. The WHO has not said whether any American experts were part of the group slated to land soon.

Dr. Nancy Messonnier, a top CDC official, told reporters on a call this week that the agency is ready to send experts to China. “The CDC stands ready to send staff to the affected areas in China to work on this investigation and as soon as we are given this invitation to do that we are happy to do that,” she said. “But we haven’t been invited yet.”