US Did More COVID-19 Testing in 8 Days Than South Korea in 8 Weeks: White House 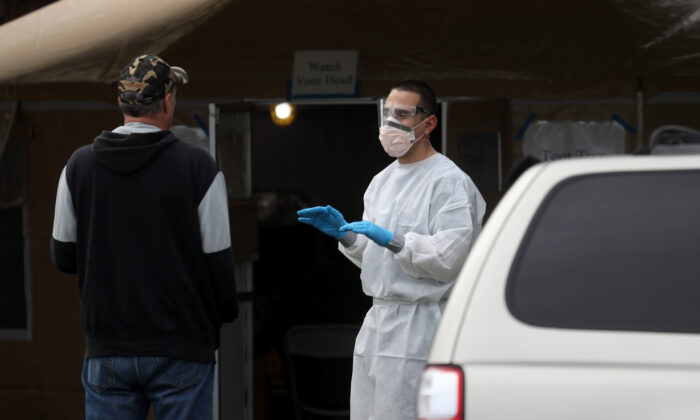 A firefighter screens a man that is waiting in line to get a COVID-19 test at a free public testing station in Hayward, California, on March 24, 2020. (Justin Sullivan/Getty Images)
By Zachary Stieber

An issue with the first test developed in the United States, by the federal government, caused a weeks-long delay in carrying out wider testing but the Trump administration has quickly ramped up testing capacity in recent weeks with the help of the private sector.

Birx said during a virtual town hall on Fox News that South Korea, which has a population of 51.4 million, tested about 290,000 people. The United States, she said, which has about 372 million residents, has done over 300,000 tests.

President Donald Trump, who also attended the town hall, said it was the first he learned of the statistics.

According to the American Enterprise Institute, which started a tracker of America’s testing capacity, the country could carry out 36,810 tests a day as of March 16. That total was expected to rise until it hit 100,000 or more per day as of March 27.

According to a worldwide tracker of cases from Johns Hopkins University, the United States has 50,206 confirmed cases of the new virus.

Officials are still concerned about not having enough test kits and urged people, as they’ve done before, without symptoms not to get tested.

The Epoch Times refers to the novel coronavirus, which emerged in China last year, as the CCP virus because the Chinese Communist Party’s coverup and mishandling allowed the virus to spread throughout China and create a global pandemic.

The new virus causes the COVID-19 disease, which is currently killing about 1.3 percent of patients who have been confirmed as having the illness in the United States. The elderly and people with underlying health conditions are most at risk of getting serious cases of COVID-19.

Ways to avoid contracting the illness include frequently washing hands, especially after visiting public places or coughing or sneezing, avoiding sick people, and regularly cleaning objects and surfaces at home, work, and school.