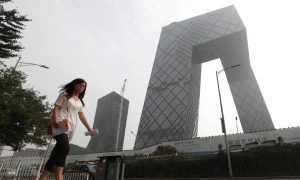 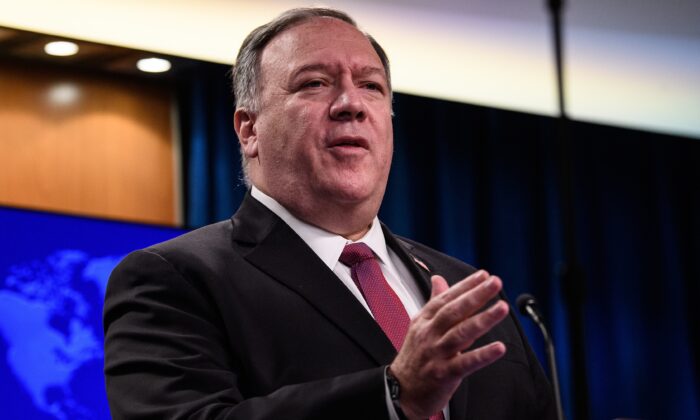 US Secretary of State Mike Pompeo speaks at a press conference at the State Department in Washington, DC, on Oct. 21, 2020. (Nicholas Kamm/POOL/AFP via Getty Images)
China-US News

The Department of State said the outlets are “substantially owned or effectively controlled” by the Chinese regime.

The designations, which restrict the outlets’ operations in the United States but don’t affect what they can publish, are in addition to the nine Chinese state media outlets that were designated as foreign missions earlier this year, in recognition of their roles as propaganda organs of the Chinese Communist Party (CCP).

The designation means they’ll be treated as foreign embassies or other diplomatic missions, and thus be required to register their employees and U.S. properties with the State Department.

“We simply want to ensure that American people, consumers of information, can differentiate between news written by a free press and propaganda distributed by the Chinese Communist Party itself. They’re not the same thing,” Pompeo said at a press conference on Oct. 21.

The China Social Sciences Press is a publishing house managed by state-run think tank Chinese Academy of Social Sciences. The Beijing Review is an English-language magazine published by the Chinese International Publishing Group, which is owned by the CCP. The Economic Daily is a publication run under the CCP’s Central Committee.

The State Department said in a statement, “Over the past decade, and particularly under General Secretary Xi Jinping’s tenure, the Chinese Communist Party has asserted greater control over China’s state-backed propaganda outlets while trying to disguise them as independent news agencies.”

The measure is among a range of Trump administration actions aimed at combating Chinese influence in the United States. In August, the State Department designated a Washington-based center that supports Beijing-backed Confucius Institutes as a foreign mission.

Confucius Institutes, which bill themselves as language and culture programs, have drawn intensified scrutiny in recent months over their role in spreading propaganda and suppressing free speech at U.S. educational institutions. Pompeo has also expressed hope that all Confucius Institutes in the United States can be closed down by the end of the year. There are currently about 67 Confucius Institutes on American college campuses, according to the National Association of Scholars.

The State Department said last month that it would require senior Chinese diplomats to apply for permission to visit U.S. university campuses or hold cultural events with more than 50 people outside mission grounds. Pompeo said at the time that the rule was made to reciprocate the “excessive restraints” placed by Beijing on American diplomats, such as having to apply for permission to host cultural events, visit university campuses, and conduct official meetings.