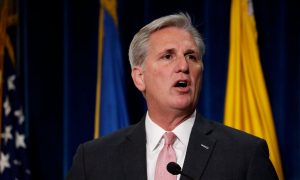 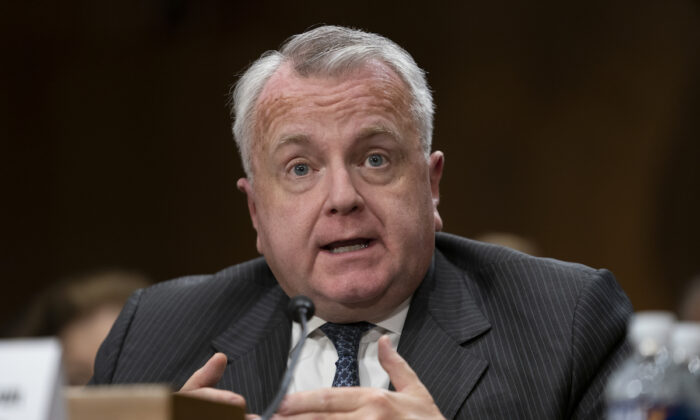 Deputy Secretary of State John Sullivan appears before the Senate Foreign Relations Committee for his confirmation hearing to be the new U.S. ambassador to Russia, on Capitol Hill in Washington, Wednesday, Oct. 30, 2019. President Donald Trump's nominee faced questions about Russian election interference and the ouster of the U.S. ambassador to Ukraine at his Senate confirmation hearing. (AP Photo/J. Scott Applewhite)
Politics

U.S. Deputy Secretary of State John Sullivan told senators that he was not aware of any quid pro quo schemes to pressure Ukraine to investigate former Vice President Joe Biden and his son.

Sullivan made the comments during his confirmation hearing to serve as the U.S. ambassador to Russia, which was held by the Senate Foreign Relations Committee on Oct. 30.

During the hearing, Sen. Marco Rubio (R-Fla.) probed the State Department official on the House impeachment inquiry, asking Sullivan whether he was a part of, or had knowledge of, any effort by President Donald Trump to pressure Ukraine to investigate a political opponent in exchange for military aid.

“Were you aware at any time, until of course, the stuff was broken in the press, but before that time, did anyone ever come to you, or were you ever aware of that sort of connection that quid pro quo that’s being alleged? Was that something that you were a part of?” Rubio asked.

“I was not, Senator,” Sullivan replied.

“You were not aware?” Rubio asked.

“I was not aware,” Sullivan confirmed.

“You never heard anyone tell you that they’ll get the money if they investigate a political opponent?” Rubio then asked.

“Not until the recent developments and disclosures from the whistleblower’s complaints,” Sullivan responded.

House investigators are determining whether the president had leveraged his office and withheld U.S. aid to Ukraine to obtain information on a political opponent—2020 Democratic candidate and former Vice President Joe Biden—in the impeachment inquiry launched by House Democrats on Sept. 24.

The inquiry is centered on allegations made by an anonymous whistleblower about the president’s conduct during a phone call with Ukrainian President Volodymyr Zelensky in July. The three committees leading the investigation—Oversight, Foreign Affairs, and Intelligence—have held a series of closed-door hearings to listen to testimony from key people surrounding the allegations.

Trump has repeatedly defended his request to look into Biden’s dealings, saying that he was asking Ukraine to investigate alleged corruption.

In 2018, Biden boasted that he had pressured then-Ukrainian President Petro Poroshenko to remove the country’s top prosecutor, who was at the time investigating a Ukrainian gas company, Burisma, where the former vice president’s son held a lucrative board position. Biden has denied any wrongdoing.

Sullivan also faced an intense grilling from Democratic senators in the committee. He told senators that he knew of the campaign by Trump’s personal lawyer, Rudy Giuliani, to oust former U.S. Ambassador to Ukraine Marie Yovanovitch from her position but was not aware of the reasons why.

He also told senators that he was aware of the hold on security assistance to Ukraine but was not aware of the reason, adding that he believes any attempt to leverage one’s office to receive information on a political rival “would be inconsistent with our values.”

“Asking a foreign government to investigate a domestic political rival as opposed to a larger anti-corruption campaign, which we have been engaged in, encouraging the Ukrainians for years, those are two different things,” Sullivan said.

Sullivan is the lead U.S. official in talks with Russia on counter-terrorism and strategic security. He testified that if confirmed he would be “relentless” in confronting Russia over its election interference, hostile moves against neighbors such as Georgia and Ukraine, human rights abuses, and violations of arms control agreements.