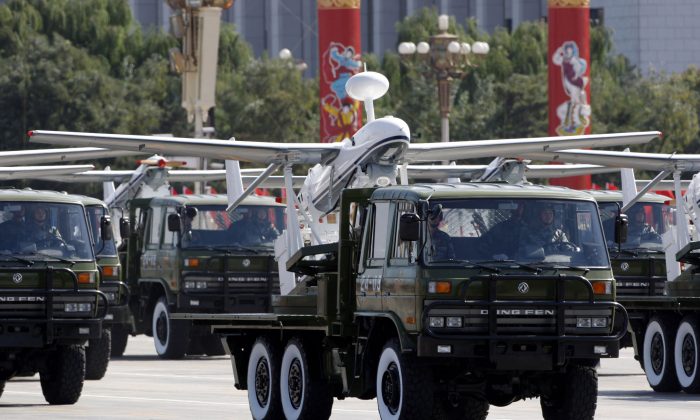 A truck loaded with the Chinese made drone, the ASN-207, takes part in a military parade on Oct. 1, 2009. (Vincent Thian/AP)
Middle East

The United States announced it will ship a prototype of Raytheon’s “Phaser” high-power microwave beam counter-drone system to Saudi Arabia for operational evaluation. But China, which has been developing “killer drones” over the last decade, has already exported over 160 to the Middle East and North Africa.

The Sept. 14 attack against Saudi Arabia’s oil facilities succeeded because Yemeni Houthi rebels kept probing the Kingdom’s layered anti-aircraft defenses with cheap quadcopter drones. After complaining about firing several $3.4 million Patriot missiles to take out a couple of $200 consumer drones, the Saudis were slow to escalate counter-measures when attacked by what turned out to be a storm of many drones and missiles.

Every military has fielded long-endurance surveillance drones, but the United States tried to limit the proliferation of larger and more lethal Unmanned Combat Air Vehicle (UCAVs) by restricting export of its missile-armed 36-foot MQ-9 Reaper until 2018.

But China developed a family of large UCAV “killer drones” over the last decade including the 28-foot “Rainbow” and 36-foot “Wing Loong,” exported at least 163 large missile-armed UCAV’s to 13 countries across the Middle East and North Africa.

China’s 3,000 pound Wing Loong-II incorporates ground-scanning synthetic aperture radar for targeting, and carries a payload of up to a dozen missiles weighing over 1,000 pounds. The drones can be programed to takeoff autonomously, fly a 1,500-mile mission, and then land without human direction on a short runway or local road.

It was reported in 2011 that Iran partnered with China to reverse engineer a U.S. RQ-170 stealth drone that went down in eastern Iran. With another dozen U.S. surveillance drones shot down or hacked by Iran over the last 8 years, including a 48-foot Northrup RQ-170 Global Hawk worth $220 million, China’s UCAV capabilities has grown rapidly.

Iran vehemently denied helping Houthis develop two dozen armed-UCAVs and cruise missiles that flew 900 miles across Saudi Arabia to take out half of Aramco’s refining capacity. But the Houthi’s plane-shaped UAV-X drone that can travel at over 150 miles-per-hour has a lot of electronic similarities to Iranian and Chinese UCAVs.

The Wall Street Journal reported on Sept. 25 that Saudi bank Jadwa Investment estimates that with two-thirds of the Kingdom’s revenue coming from crude oil exports, losing 5 million barrels a day, or about $340 million, of its export capacity in the recent attacks represents an existential threat to the Saudi solvency over an extended period.

The U.S. Air Force has been experimenting with a number of directed energy weapons to protect America’s 6 aircraft carriers that patrol the Pacific Ocean from China’s string of artificial island fortresses armed with surveillance and killer drones. China’s Ministry of Natural Resources announced on Sept. 11 that drones will be key to enforcing its “Exclusive Economic Zone” claims for one million square miles of the South China Sea.

Raytheon revolutionized the lethality of drones by mounting its shoulder-launched Stinger missiles to American MQ-9 Reapers. The company also pioneered counter-UCAV mission technology with the development of precision Ku-band Radio Frequency System radar that can track and target small and large drones.

The Phaser system is currently housed in a 20-foot shipping container with a high-power microwave directed energy weapon on top. The system uses electro-optical and infrared cameras to identify and target incoming drones. The directed microwave energy weapon can operate in disrupt or destroy mode by internally frying drone electronic components. The company hopes to both scale up Phaser to attack drone “storms,” and size down Phaser to field man-portable units.