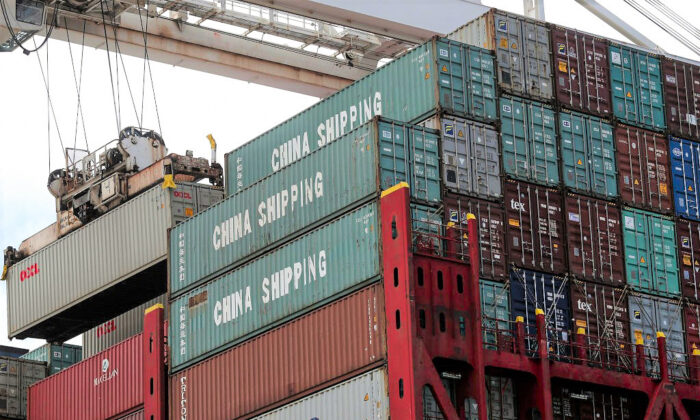 A shipping container is offloaded from East China Sea container ship at the Port of Oakland in California on June 20, 2018. (Justin Sullivan/Getty Images)
Economy

The U.S. Department of Agriculture (USDA) announced on Jan. 30 that it will help fund a new container yard at California’s Port of Oakland in an effort to tackle ongoing shipping delays.

“With the delays and disruptions that are occurring, market share is at risk,” Agriculture Secretary Tom Vilsack told Reuters.

A new 25-acre acre “pop-up site” will be opened at the port to create further space to prepare empty containers and help alleviate the supply chain crisis. The site will move containers off chassis and store them so that they can be picked up rapidly, according to officials.

Transportation Secretary Pete Buttigieg said in a statement to Reuters that “inland pop-up ports” improved the flow of goods at the Port of Savannah in Georgia, which is one of the busiest facilities in the country.

The White House announced in November 2021 that it would be providing a grant to fund five pop-up container yards in both Georgia and North Carolina.

“Under the plan, the Port of Savannah will transfer containers via rail and truck further inland so that they can be closer to their final destination, which will make available valuable real estate closer to the port,” a White House fact sheet reads. “The effort will free up more dock space and speed goods flow in and out of the Port of Savannah, which leads the nation in containerized agricultural exports.”

Buttigieg said the Biden administration plans to work with other ports by using a similar concept to help ease congestion.

USDA will pay 60 percent of the startup costs of the new pop-up sites in the Port of Oakland and will partner with the port itself to partially cover a $125 per container reimbursement made to shippers, Vilsack said.

In December 2021, the Port of Oakland announced that containerized, loaded import cargo volume hit a record high in 2021. The port handled the equivalent of 1.05 million 20-foot import containers in 2021, which was the most in Oakland’s 94-year history and 6 percent more than the amount it handled in 2020, during the early stages of the COVID-19 pandemic.

However, officials noted that the supply chain crisis had affected the port’s export volume, leading to ships arriving late, canceled trips, and weeks-long delays, something they expect to continue into 2022 amid a surge in demand.

The U.S. Consumer Price Index rose by 7 percent year-over-year in December 2021, according to the latest data from the Department of Labor, representing the fastest growth since June 1982.

Strong consumer demand has intensified supply shortages, while the recent wave of the Omicron coronavirus variant cases across the nation and the rest of the world has further exacerbated supply chain issues.

Representatives for the Port of Oakland and the Department of Agriculture didn’t respond to a request for comment by press time.