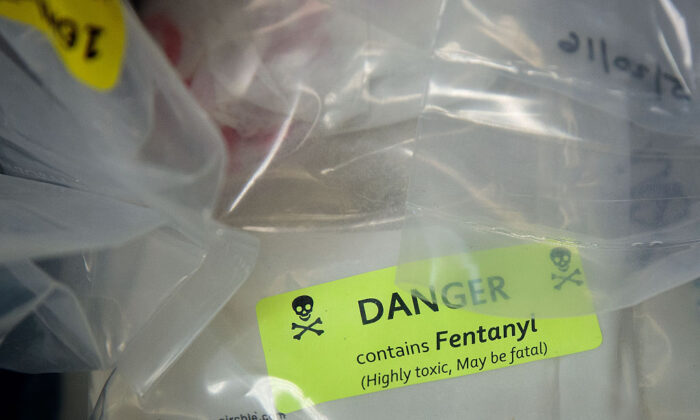 Bags of heroin, some laced with fentanyl, are displayed before a press conference regarding a major drug bust, at the office of the New York Attorney General, in New York City, on Sept. 23, 2016. (Drew Angerer/Getty Images)
By Frank Fang

The influx of Chinese illicit drugs in America has prompted the U.S. Congress to address the country’s opioid crisis in a massive defense spending bill.

Fentanyl, a synthetic opioid, is 100 times more potent than morphine and 50 times more powerful than heroin, according to the Centers for Disease Control and Prevention (CDC). As little as two milligrams is considered a lethal dosage for most people.

Lethal overdoses of fentanyl killed 71,500 Americans in 2017, according to data released by the CDC. And China is the largest source of illicit fentanyl and fentanyl-like substances in the country, according to a 2018 report by the U.S.-China Economic and Security Review Commission (USCC).

The NDAA, which sets budgets and expenditure for the Pentagon, adopted a bill called the “Fentanyl Sanctions Act,” which would impose “economic and other financial sanctions to foreign traffickers of illicit opioids.”

The bill also contains language that calls out Beijing to “follow through on full implementation” of new regulations effective on May 1, and to tighten control on all fentanyl analogs.

The new Chinese regulations, announced in April, included measures such as adding all fentanyl-related substances to China’s list of controlled substances, and for Chinese investigators and customs officials to step up their enforcement efforts.

At that time, U.S. Rep. Chris Smith (R-N.J.) and other lawmakers expressed skepticism about China’s new efforts, questioning whether the measures would curb the flow of Chinese illicit drugs into the United States.

Bipartisan lawmakers have been pushing for U.S. legislation to protect Americans from becoming victims of illicit drugs coming from China.

In early April, a group of U.S. senators, including Sen. Charles Schumer (D-N.Y.), introduced their version of the Fentanyl Sanction Act (S.1044). Companion versions of the bill were also introduced to the House.

“When it comes to taking genuine action to address this crisis, China continues to kick the can down the road while American lives are kicked to the curb, enveloped by addiction or cut all too short by tragedy,” Schumer said in a Dec. 11 statement applauding the inclusion of the Fentanyl Sanction Act in the NDAA.

Schumer added: “In New York State, from November 2017 to 2018, approximately 2,000 people died from opioid overdose. About 1,500 of those deaths were from synthetic opioids like fentanyl.”

Schumer added that he expects NDAA to be passed early next week.

Rep. Vern Buchanan (R-Fla.), who introduced a House version of the bill, in a Dec. 12 statement said the United States needs to “hold Beijing accountable for any lack of progress controlling the fentanyl freely flowing out of their country.”

Citing data from two local county sheriff offices in Florida, Buchanan pointed out that overdoses and deaths significantly increased this year from a year ago. In Manatee County, there were 601 overdoses and 61 deaths in October, which was more than twice as many deaths during the same period last year.

“This is a frightening development considering that just a few years ago the number of overdoses was declining,” Buchanan added.

Aside from the Fentanyl Sanctions Act, the NDAA has also included language from another U.S. bill—the Protect Our Universities Act (H.R. 1678)—to protect sensitive university research from foreign espionage.

The House bill was introduced by a group of representatives, including Jim Banks (R-Ind.) in March. The Senate version (S.1879) was introduced in June. The legislation was introduced amid heightened concerns that the Chinese regime was targeting U.S. universities and research institutes for theft of sensitive intellectual property.

The NDAA includes a provision that requires the Department of Defense to collect background information on any individual taking part in the Pentagon-funded research.

“The Chinese government has a long record of manipulating and pressuring Chinese nationals who study at American universities to be information collectors for the communist government and military in Beijing,” stated Banks in a Dec. 12 press release from his office.

The Australian Strategic Policy Institute (ASPI), an independent think tank partially funded by Australia’s Department of Defense, in an October report, pointed out that Beijing has since 2007 sent out more than 2,500 Chinese military scientists and engineers around the world to study in overseas institutions, often by masking their military ties.