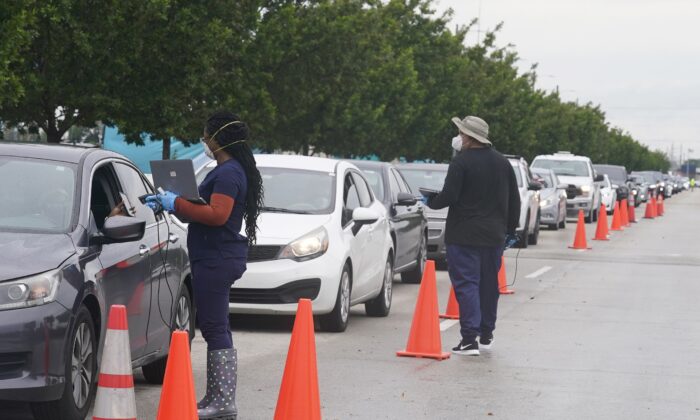 Employees of Nomi Health check in a long line of people for COVID-19 tests in North Miami on Dec. 21, 2021. (Marta Lavandier/AP Photo)
By Jack Phillips

The United States’ daily COVID-19 case numbers reached near-record levels due to the spread of the Omicron variant, surpassing the earlier Delta surge. But hospitalizations so far have remained relatively low, as researchers have suggested the new strain presents milder symptoms.

As of Dec. 22, about 243,817 new COVID-19 cases had been reported across the country, according to the most recent data released by the Centers for Disease Control and Prevention (CDC). Some officials believe the peak of the Delta surge came sometime in late August or early September. CDC data show that about 198,000 cases were reported during Delta’s peak on Sept. 1.

Around 64,000 Americans were hospitalized with COVID-19 on Dec. 25, according to data from the U.S. Department of Health and Human Services. That represents an increase of about 3 percent from the prior week, when around 62,000 people were hospitalized on Dec. 18.

Currently, about 75 percent of all intensive care unit beds in the country are in use, with 21 percent occupied by COVID-19 patients, according to data from the Department of Health and Human Services.

New York state, meanwhile, broke its own daily record of COVID-19 cases on Dec. 24 after reporting about 44,331 new cases—or a 14 percent increase from the previous day. COVID-19 is the illness caused by the CCP (Chinese Communist Party) virus.

“This is not a surprise,” Democratic New York Gov. Kathy Hochul told reporters. “This is a very, very contagious variant.”

But several recent studies, including two published by UK researchers, suggest that Omicron presents less severe symptoms and results in fewer hospitalizations overall. So far, only one death has been reportedly associated with the variant in the United States, one in Germany, one in Australia, and around a dozen in the UK.

Government officials are beginning to take notice, too. The UK Health Security Agency said last week that Omicron is up to 70 percent less likely to result in hospitalization so far.

More than a week ago, South Africa’s Ministry of Health said the variant—which emerged in South Africa last month—noted that hospitalizations in the country “remain low.”

Few Omicron-related deaths have been reported so far in the United States. Authorities near Houston said last week that they believe the first fatality in connection to the strain occurred in Harris County.

Despite the variant’s apparently milder nature, cities and municipalities across the U.S. have increasingly implemented mandates and vaccine passport systems.

This month, Philadelphia, Boston, and Chicago became the latest to impose vaccine passports for restaurants, gyms, and other venues. The mayors of those cities cited the spread of Omicron as a primary reason for the new mandates, despite little evidence showing that they work to curb the CCP virus.

But some federal health officials, including Biden administration adviser Anthony Fauci, have warned that because of Omciron’s highly transmissible nature, more COVID-19 cases can be expected than during previous waves.

“Well, there’s one thing that’s for sure that we all agree upon, that it is extraordinarily contagious,” Fauci told ABC News on Dec. 26. ”It’s just outstripped even the most contagious of the previous ones, including Delta. There’s no argument on anybody’s part about that.”

“If you have many, many, many more people with a less level of severity, that might kind of neutralize the positive effect of having less severity when you have so many more people,” said Fauci, who has courted controversy over his public statements about the federal government’s involvement in funding research at a lab in Wuhan, China, the city where the virus first emerged in late 2019.

The variant, he said, may reach more people, leading to increasing numbers of people experiencing symptoms.

Over the weekend, the CDC issued an alert to health care workers to prepare for a possible surge in hospitalizations and cases.

“Under conventional conditions, healthcare facilities can allow asymptomatic healthcare personnel with SARS-CoV-2 infection, regardless of vaccination status, to return to work after seven days and a negative test in accordance with CDC guidance,” the alert said.

However, under “crisis” conditions, health care workers can return to work after five days as a last resort without any testing as long as they remain asymptomatic. Those health care workers should wear a respirator or well-fitting face mask while on the job, the federal health agency said.