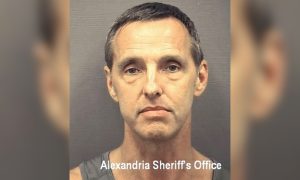 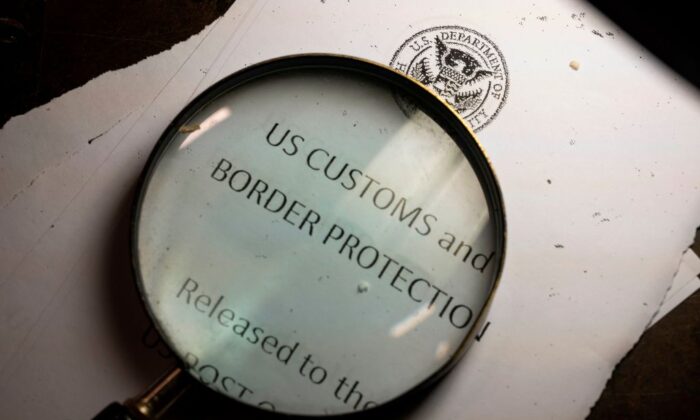 A magnifying glass is seen next to a logo of the Customs and Border Protection, Trade and Cargo Division at John F. Kennedy Airport's US Postal Service facility in New York on June 24, 2019. (Johannes Eisele /AFP via Getty Images)
US-China Relations

US Customs Officials Seize Millions Worth of Counterfeit Purses from China

According to a Nov. 8 press release from U.S. Customs and Border Protection (CBP), the items, found in an air cargo shipment arriving at Washington Dulles International Airport on Sept. 25 from China, were detained by officials after they suspected the shipment might contain counterfeit goods.

After verification by CBP’s trade experts, the items were determined to be fake goods, and they were subsequently seized on Nov. 7.

If all of these goods were sold as authentic, they would have an estimated street value of about $2.24 million.

China is the largest source of goods seized in the United States that violate intellectual property rights (IPR).

In 2018, U.S. Immigration and Customs Enforcement (ICE) arrested 381 individuals, obtained 296 indictments, and received 260 convictions related to IPR-related crimes, according to the press release.

According to a CBP annual report, there were 33,810 IPR-related seizures in fiscal year 2018. Among these, 46 percent originated in China, followed by Hong Kong at 41 percent. If authentic, all of the products seized last year would have had an estimated street value of about $1.4 billion.

The year prior, China was also the biggest source of counterfeits, accounting for 48 percent of a total of 34,143 IPR-related seizures.

A 2017 report by the IP Commission of the National Bureau of Asian Research, an independent research organization, estimated that the annual cost of trade-secret theft, including counterfeit goods, to the U.S. economy is between $180 billion and $540 billion.

There were several cases of Chinese counterfeits goods being seized in Texas last year.

At the same port in June 2018, U.S. customs agents seized 181,615 pieces of trademark-infringed merchandise, with an estimated street value of more than $42.9 million. Among the items seized were knockoffs of apparel brands such as Adidas, Nike, Under Armour; and popular electronics and watch brands including Apple, Casio, Rolex, Samsung, Sony, and LG.

In August this year, CBP officials in Philadelphia seized over 4,440 counterfeit phones bearing the brand names of either LG or Asus. If authentic, these knockoff phones would have a suggested retail price of $941,450. The shipment originated in China and transited through the Dominican Republic before arriving in Philadelphia.

In September, CBP officials in Los Angeles seized 5,202 counterfeit refrigerator water filters, valued at $224,202 if authentic. The shipment, also originating in China, was headed to the state of Washington. These filters infringed upon popular U.S. brands including Brita, GE, and Frigidaire.

“Customs and Border Protection will continue to work closely with our trade and consumer safety partners to intercept counterfeit consumer goods, especially products that can harm American consumers,” Durst said in the press release.