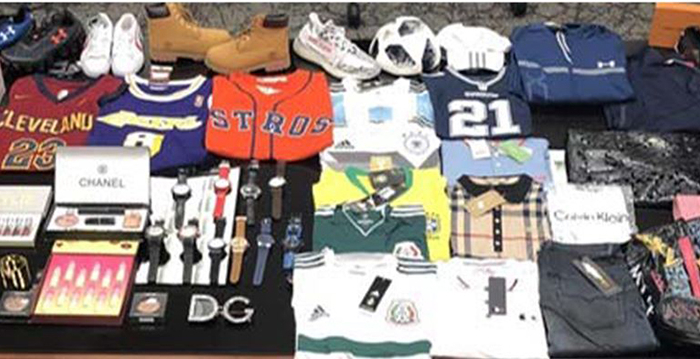 US Customs Agents Seize $42.9 Million Worth of Chinese Counterfeits in Texas

In less than two months, U.S. customs agents in Texas have busted two multimillion-dollar shipments of counterfeit goods from China.

After a three-day surveillance sting in mid-June, special agents with the U.S. Immigration and Enforcement (ICE) seized 795 boxes labeled with fake shipping addresses in Laredo, Texas, according to a July 6 press release by the ICE.

On July 3, the customs agents tallied up what was inside the boxes—181,615 pieces of trademark-infringed merchandise, with an estimated street value of more than $42.9 million.

In May, ICE agents seized almost 79,000 fake goods valued at more than $16 million at the same port.

ICE said both attempts to move counterfeit goods into the United States was done by the same Laredo-based criminal organization.

Together, the two seizures netted more than 260,000 pieces of clothing, consumer electronics, cosmetics, and jewelry worth up to $59 million in value.

ICE explained that, based on past criminal conduct, illicit goods are typically first shipped to Mexico, where smugglers would bribe Mexican cartels, who in turn extort Mexican law enforcement officials. Then, these officials would allow goods to pass through the United States without inspection or import duties.

China is the source of most of the world’s counterfeit goods. According to a 2017 report on intellectual property rights (IPR) seizure by the U.S. Department of Homeland Security, there were 34,143 IPR seizures in the United States in 2017, an increase of 8 percent from 2016, of which 46 percent originated from China and 32 percent originated from Hong Kong, followed by Vietnam in third place with 19 percent.

If all the fake goods coming from China and Hong Kong were authentic, according to the report, it would have a retail price of about $940 million.

Buying counterfeits could indirectly lead to the funding of criminal enterprises and their illegal activities, according to U.S. Customs and Border Protection (CBP), the law enforcement agency under the Department of Homeland Security. Its impact on U.S. economy was enormous, leading to loss of revenues for U.S. companies, and eventually loss of U.S. jobs over time.

A 2017 report by the IP Commission of the National Bureau of Asian Research, an independent research organization, estimated that the annual cost of trade secret theft, including counterfeit goods, to the U.S. economy is between $180 billion and $540 billion.

The two seizures in Laredo are part of a longtime pattern of Chinese knockoffs entering the U.S. market. According to data from the CBP, the number of IPR seizures related to counterfeits has increased steadily since 2010, with 19,959 seizures in 2010 compared to 34,143 seizures in 2017—an increase of 71 percent.

On June 28, CBP officers reported a case in Philadelphia in which a consignment parcel disguised as lithium batteries from Hong Kong turned out to be counterfeit luxury brand watches with suggested retail prices of nearly $10 million.

The fake watches were designed to look like luxury brands like Rolex, Tous, Hublot, Piguet, Panerai, Patek, Fossil, and Harley Davidson. But the quality of the watches and their packaging were poor, according to the CBP.

“This is a significant seizure, both in terms of dollar value, and in the message that it sends to individuals and organizations that traffic in counterfeit and pirated goods,” said Joseph Martella, CBP port director for the Area Port of Philadelphia.

CBP said on a typical day, the agency seizes an average of $3.3 million worth of products with IPR violations.