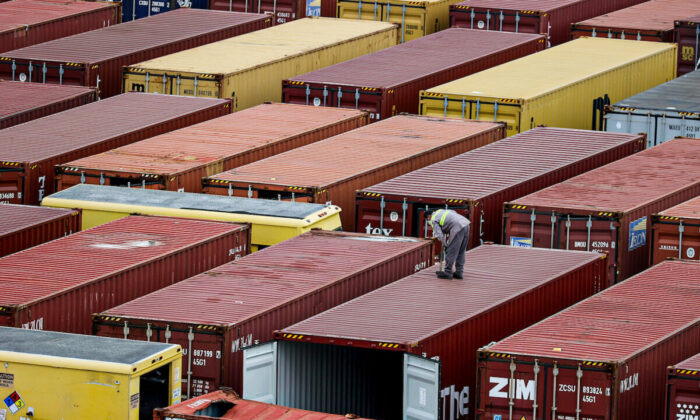 Shipping containers are stacked after being offloaded from a boat in Miami, Florida on Nov. 4, 2021. (Joe Raedle/Getty Images)
Business & Economy

The current account deficit, which essentially reflects U.S. expenditure exceeding income, rose sharply in the third quarter to its highest level in 15 years, driven by a reduced surplus in services and a surge in goods imports as businesses rushed to build up inventories in the face of strong demand.

“The $16.5 billion widening of the current-account deficit in the third quarter reflected a reduced surplus on services and expanded deficits on secondary income and on goods that were partly offset by an expanded surplus on primary income,” the Commerce Department said.

The extent of the shortfall was an upside surprise, with consensus forecasts expecting a gap of $205 billion.

Many economists argue that a current account deficit is not inherently good or bad—for instance, it could be related to timing, with temporarily higher imports within a given period later offset by higher exports at a later date.

“A good deficit supports smooth transitions—for instance, from building productive capacity while accumulating external debt to subsequently accumulating assets, and then drawing them down as the population ages,” the World Bank said in a 2018 policy brief.

But economists also generally agree that a current account deficit is bad and can lead to harmful impacts when it becomes unsustainable.

“Although a current account deficit in itself is neither good nor bad, it is likely to be unsustainable and lead to harmful consequences when it is persistently large, fuels consumption rather than investment, occurs alongside excessive domestic credit growth, follows an overvalued exchange rate, or accompanies unrestrained fiscal deficits,” according to the World Bank.

While the United States is to some extent insulated to some of the harmful impacts of a current account deficit as the U.S. dollar is the world’s reserve currency and the country is seen as an attractive place to invest, excessive reliance on large inflows of money from abroad can be problematic.

Sebastian Edwards, a research associate at the University of California, wrote in a working paper for the National Bureau of Economic Research (NBER) on the U.S. current-account deficit when it surged in 2006, that its sustainability depends on whether foreign investors will continue to add U.S. assets, like government securities, to their investment portfolios.

“Even if the United States has special status in the global economy and is a very attractive place to park one’s money, foreign investors are unlikely to keep propping up U.S. trade and budget imbalances and spending sprees indefinitely,” NBER wrote in a review of Edward’s paper.

If investors sour on U.S. Treasurys, for instance, this could drive up yields and cause borrowing costs to balloon. A U.S. current account deficit “reckoning” would, according to Edwards, lead to a painful adjustment that would sap economic growth.