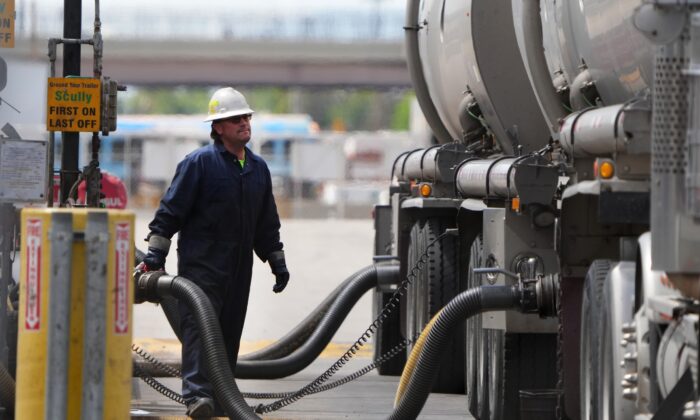 A driver unloads raw crude oil from his tanker to process into gas at Marathon Refinery in Salt Lake City, Utah, on May 24, 2022. (George Frey/Getty Images)
Commodities

After Saudi Arabia announced a rise in crude prices for July, crude oil futures in the United States hit their highest level in nearly three months.

Saudi Arabia’s Aramco, the biggest oil exporter in the world, raised the July official selling price  to Asian buyers for its flagship Arab light crude by $2.10 per barrel from its June price to a premium of $6.50 per barrel.

More than 60 percent of Saudi Arabia’s oil exports go to Asia, with China, India, Japan, and South Korea being its biggest buyers. The Saudi company also raised prices for customers in the Mediterranean and northwestern Europe. However, prices for its U.S. customers remained unchanged.

Aramco’s move to raise prices came following a decision by the Organization of Petroleum Exporting Countries (OPEC) and its allies to raise output in July and August by 648,000 barrels per day, which is 50 percent more than previously planned.

Though the output increase is spread across OPEC nations and allies, not all countries are in a position to raise production. This includes Russia, which is currently under Western sanctions for its invasion of Ukraine.

Citibank and Barclays are expecting Russian oil output and exports to decrease by around 1 to 1.5 million barrels per day (bpd) by the end of this year.

“With only a handful of … OPEC+ participants with spare capacity, we expect the increase in OPEC+ output to be about 160,000 barrels per day in July and 170,000 bpd in August,” J.P. Morgan analysts said in a note, according to Reuters.

According to Vishnu Varathan, head of economics and strategy at Mizuho Bank, Aramco’s price hike suggests a stronger oil demand outlook, specifically in Asia where COVID-19 lockdowns have been easing.

OPEC producers are struggling to raise output even though pandemic curbs have been relaxed and “output ceiling has been raised,” Varathan wrote in a Monday note, according to Business Insider. Except for Saudi Arabia and the United Arab Emirates, “there may be very little to increase supply adequately to tame oil prices.”

Meanwhile, U.S. oil output has moved higher, according to the latest data from the U.S. Energy Information Administration. Output in March rose by over 3 percent to its highest level since November 2021.