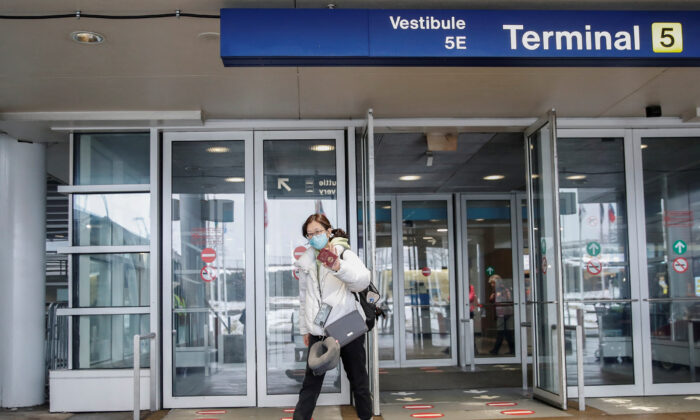 A passenger wearing a mask, amid the health threat of COVID-19, arrives on a direct flight from China at Chicago's O'Hare airport in Chicago, Illinois, on Jan. 24, 2020. (Kamil Krzaczynski/Reuters)
CCP Virus

US Criticizes China for Canceling Flights Over COVID-19 Cases

“China’s actions are inconsistent with its obligations under the U.S.-China Air Transport Agreement,” a spokesperson of the U.S. Department of Transportation told The Epoch Times in a Jan. 14 email.

“We are engaging with the [Chinese government] on this and we retain the right to take regulatory measures as appropriate,” the department said.

Beijing on Wednesday ordered the suspension of six more U.S.-to-China flights in the coming weeks due to a growing number of COVID-positive passengers, rising to 70 flight cancelations mandated this year.

China has also been suspending flights with other countries, including six flights from France and Canada.

The suspension will see overseas Chinese people stranded in foreign countries as the Chinese New Year, known as the Lunar New Year, is two weeks away.

A Chinese passenger surnamed Qiu told the Chinese language edition of The Epoch Times that she and her daughter secured only one airline ticket at the price of 60,000 yuan (about $9,436) from New York’s JFK Airport on Jan. 12. They failed to purchase the second ticket till the end, and decided to give up the one they had already purchased and stay in New York.

Travel agency Yes Holidays USA said it had advised its customers not to go back to China unless it’s absolutely necessary.

“I have a customer who changed his ticket six times in total,” said company head Ye Qiusheng during a recent interview. “Buying tickets now is like buying a lottery ticket.”

He said that his company’s income slipped by 90 percent while customers changed or canceled their tickets.

According to a notice issued by the Chinese regulator last year, if five or more air passengers test positive for COVID-19 en route to China, the airline will have to suspend the flight for at least two weeks.

Despite the Chinese regime’s “zero-COVID” policy, Beijing recently reported rising cases of the highly transmissible Omicron variant, as it prepares for the Winter Olympics in early February. China is expecting thousands of athletes, officials, journalists, and visitors.

Shi Ping,  Zhou Hanyin, and Reuters contributed to this report.