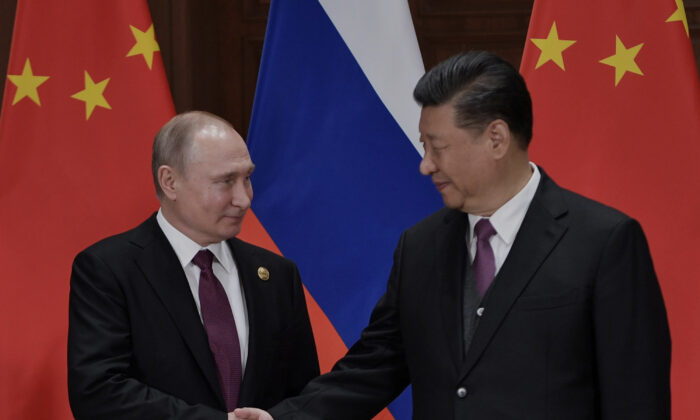 U.S. State Department Ned Price on Feb. 23 criticized China and Russia for seeking to create a new “profoundly illiberal” world order, with the current Russian aggression against Ukraine being a part of that.

Price pointed to the two nations’ joint statement released earlier this month as evidence for their desire of achieving such a world order, during a regular news briefing.

“But this is an order that is and would be profoundly illiberal, an order that stands in contrast to the system that countries around the world … have built in the last seven decades,” he said.

“It is an order that is in many ways destructive rather than additive.”

Russian President Vladimir Putin traveled to China’s capital Beijing on Feb. 4, the opening day of the 2022 Winter Olympics, to meet with the Chinese leader Xi Jinping. After their meeting, they released a lengthy statement, claiming that the two bordering nations enjoy an unprecedented strong tie where there would be “no limits” in their partnership and “no ‘forbidden’ areas of cooperation.”

The statement also joins China in Russia’s opposition to the “further enlargement of NATO.”

Price said every responsible country in the world, including China, had “an obligation to use any influence it has” to urge Putin to de-escalate the Ukraine crisis.

“You will have to ask the PRC [People’s Republic of China] whether they have used their own considerable influence with the Russian Federation to that end,” he said.

A reporter asked Price about mixed signals coming from Beijing in terms of its stance on Ukraine, pointing to how the communist regime has stressed the importance of state sovereignty while having also voiced against NATO expansion.

China often uses state sovereignty as an excuse to deflect international criticism on its policies in Hong Kong, Taiwan, Tibet, and Xinjiang. The communist regime claims that what happens in these areas are its “internal affairs.”

In response, Price noted that Beijing had often in its statecraft said that the principle of sovereignty was “inviolable” and “sacrosanct.” Then he told the reporter to ask China.

“So, you’ll have to ask the PRC [People’s Republic of China] how they marry that longstanding position with anything less than an effort to use the considerable influence and sway they have with the Russian Federation to urge Vladimir Putin to back down, to de-escalate,” Price said.

On Feb. 23, Ukraine declared a state of emergency and introduced conscriptions of reservists, while calling on its citizens to leave Russia immediately. On Feb. 24, Putin announced a “special military operation” in Ukraine.

At least five countries—Australia, Canada, Japan, the United Kingdom, and the United States—have imposed sanctions on Russia as the Ukraine crisis deepens.

Secretary of State Antony Blinken told the Chinese Foreign Minister Wang Yi about the need to “preserve Ukraine’s sovereignty and territorial integrity” during their phone call on Feb. 22.

White House national security adviser Jake Sullivan warned on Feb. 6 that China would “end up owning” some of the costs if the regime is seen as supporting a Russian invasion of Ukraine.

Three days earlier, on Feb. 3, Price warned Chinese firms that they would face consequences if they attempted to evade any U.S. export controls imposed on Russia in the event of Russia invading Ukraine.

“We have an array of tools that we can deploy if we see foreign companies, including those in China, doing their best to backfill U.S. export control actions, to evade them, to get around them,” Price said.