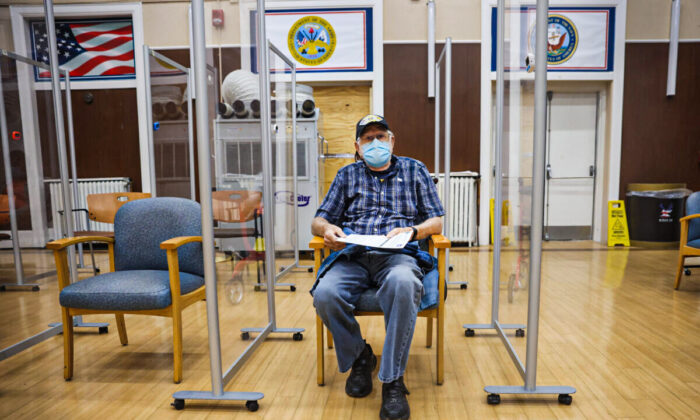 An Army veteran waits to see if he has a reaction after receiving a COVID-19 booster vaccine at a Veterans Affairs hospital in Hines, Ill., on Sept. 24, 2021. (Scott Olson/Getty Images)
US News

The number of reported COVID-19 deaths in the United States in 2021 has surpassed the death total in 2020, according to data from the Centers for Disease Control and Prevention (CDC) and Johns Hopkins University.

As of this past weekend, the number of reported COVID-19 deaths reached 770,816 since the start of the COVID-19 pandemic, according to Johns Hopkins. In 2020, 385,343 COVID-19 deaths were reported, CDC death-certificate data show.

Subtracting the 2020 number from the Johns Hopkins total leaves 385,457 COVID-19 deaths reported for 2021 so far. The CDC currently shows 382,861 deaths in 2021, but that count lags behind the Johns Hopkins figure because it only includes the reported deaths after they’ve been received and processed by the National Center for Health Statistics.

The Johns Hopkins’ case-to-fatality ratio for the United States suggests that COVID-19, the illness caused by the CCP virus, has an approximately 99 percent survival rate. It’s also likely that the number of COVID-19 cases reported to the CDC—which now stands at 47 million in the United States—is undercounted, as not everyone has engaged in routine COVID-19 testing.

This comes days after the Biden administration unveiled a rule that would mandate vaccines or testing for workers at private businesses with 100 or more employees, starting on Jan. 4. The rule, which authorizes the federal government to hand down fines of thousands of dollars per violation, has faced a number of lawsuits.

Last week, the U.S. 5th Court of Appeals reaffirmed its order to temporarily block enforcement of the rule, issuing a scathing ruling that sharply questioned the constitutionality of the mandate. After the ruling, the Occupational Safety and Health Administration, or OSHA, stated that it would suspend enforcement of the rule.

OSHA, in posting the announcement on its website, said it “remains confident in its authority to protect workers in emergencies.”

In Germany, which has a higher vaccination rate than the United States, the seven-day COVID-19 incidence rate rose to its highest level since the pandemic began for the 14th consecutive day on Nov. 21, reaching 372.7 nationwide.