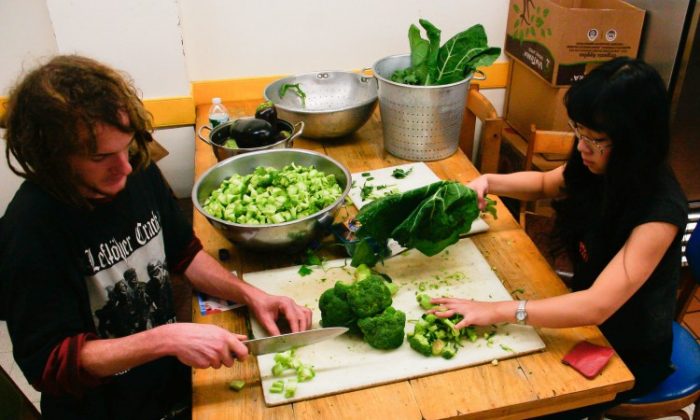 Some fruits and vegetables that have been grown naturally do not fit the criteria for supermarkets. (Uli Westphal)
US

US Could Tighten Belt By Wasting Less Food: Report

WASHINGTON—America produces massive amounts of food for domestic consumption, devoting half of available land and implicating 80 percent of fresh water resources in getting food from farm to fork. And yet, 40 percent of the food produced is not even eaten, says a report on food waste.

“When I saw how much waste, I was really shocked,” said Dainvolvna Gunders, author of the report Wasted: How America Is Losing Up to 40 Percent of Its Food From Farm to Fork to Landfill.

Gunders was researching ways to grow food more sustainably when she realized that there was little sense in that if it was just going to end up as landfill.

“There is a real opportunity to make our system more efficient—before we go off and convert other land to produce food or take more drastic steps—and that is to make sure we area eating the food we are already growing,” Gunders said to The Epoch Times in a phone interview.

In her report, produced for the Natural Resources Defense Council, Gunders identifies food waste from the farm through the processing, distribution, and retail chains, and finally to the consumer—a process she estimates costs taxpayers the equivalent of $165 billion each year.

Losses Down the Line

At the farm level, food loss falls largely into two areas: food that is grown but not harvested, and food that is lost between the farm and the point of sale.

Reasons for not harvesting can vary and can include overplanting to hedge against a bad season, oversupply making it economically nonviable to harvest, labor shortages, or pests, disease, and weather.

Even when produce is harvested, it may not make it to the market because of culling, the report says. Products are excluded by big buyers if they do not conform to specific criteria for size, color, weight, complexion, and even sugar level.

One packer of citrus, stone fruit, and grapes estimated that 20 to 50 percent of the produce he packages is rejected by the market but is fine to eat, the California Association of Food Banks (CAFB) reports.

Eric Manke, spokesman for the CAFB, says the charity relies on donations from farmers, the produce often just one grade below supermarket level and sometimes sought out by other industries but mostly unsalable.

“We try to handle all of the shipping and storage cost to help out the growers and help them break even when they donate the produce to us,” Manke said in a phone interview.

Losses continue as fresh produce goes through processing—packaged, pitted, skinned, and shaped—and then to distribution where perishables are vulnerable to mishaps and rejection.

It is retail however, where big savings could occur in the United States, but to date do not. Waste is seen as a sign of abundance and profitability.

“If a store has low waste numbers it can be a sign that they aren’t fully in stock and that the customer experience is suffering,” according to a former president of Trader Joe’s who is quoted in the report.

That attitude contributes to an annual $15 billion loss in unsold fruits and vegetables for supermarkets, according to the report.

Gunders says it is ironic that waste is considered a positive when it is so costly—a fact that appears to have registered among retailers overseas.

Waste reduction initiatives in any of the processes will require an attitude change that will ultimately be driven from the bottom up, says Gunders.

“The food industry is trying to sell as much as they can using all the persuasive techniques that they know, so that is a tough one where consumer awareness is going to be important,” she said.

Part of the problem is consumer attitude, many lured by the promise of savings or largely unaware of a waste problem. According to the report, Americans throw out one-quarter of the food and beverages they buy.

While state and federal governments encourage recycling, that too has a ways to go. In a 2010 report, the Environmental Protection Agency (EPA) estimated that food waste accounted for nearly 14 percent of the total municipal solid waste (MSW) stream, but that less than three percent was recovered and recycled.

“The rest—33 million tons—was thrown away, making food waste the single largest component of MSW reaching landfills and incinerators,” the EPA said on its website.

Gunders’s report includes plenty of initiatives and recommendations to reduce waste at each level of the food production process.

She says reducing waste should be a priority at a time of recession and as drought pushes food prices up, and she hopes her research will inspire discussion among public and private sectors.

“We should be hoping Americans save money, and one of the ways to do that is have them not waste anything on food they are not eating,” she said.