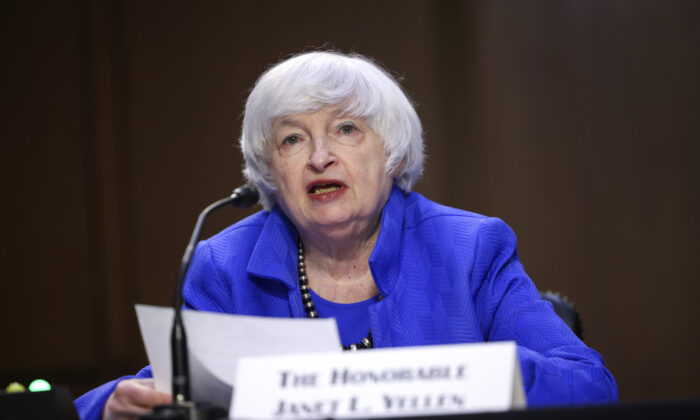 US Could Default Soon After Dec. 15, Yellen Warns

Treasury Secretary Janet Yellen told Congress on Tuesday that the Treasury Department could potentially be unable to meet the government’s financial obligations around Dec. 15.

In a letter to congressional leaders, Yellen said that the deadline for a potential government default was extended from Dec. 3 to Dec. 15 and the adjustment was “based on our most recent information,” a reference to Treasury tax collections and cash flow data.

The new deadline means Congress has more time to raise the federal debt ceiling, which currently stands at $28.9 trillion.

Yellen said the Treasury would be able to make a $118 billion transfer to the Highway Trust Fund required on Dec. 15, as required by the sweeping infrastructure bill President Joe Biden signed into law on Monday. The transfer would count against the debt ceiling, as the funds would be invested in non-marketable Treasury securities.

“To ensure the full faith and credit of the United States, it is critical that Congress raise or suspend the debt limit as soon as possible,” Yellen told congressional leaders.

Besides raising or suspending the debt limit, lawmakers must also approve a budget by Dec. 3 when current stopgap funding measures run out.

Meanwhile, lawmakers continue to debate over the $1.75 trillion reconciliation bill, also known as the Build Back Better bill. The proposed legislation would provide new energy tax breaks and see the largest expansion of social programs since the 1960s. Senate Majority Leader Chuck Schumer said Tuesday that Senate Democrats aimed to pass the measure before Christmas.