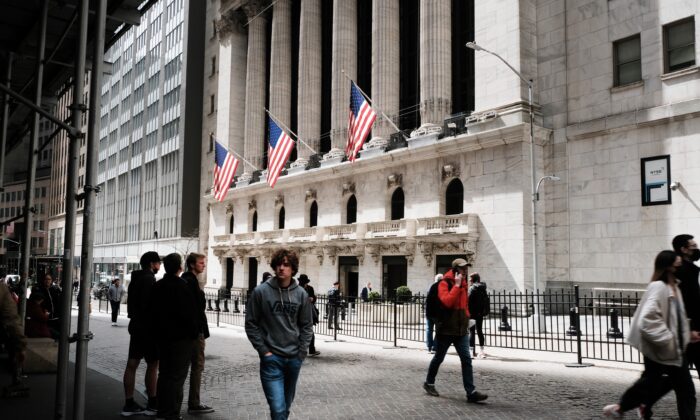 US Could Be Headed for Recession: Economist

Isabel van Brugen
Reporter
Isabel van Brugen is an award-winning journalist and currently a news reporter at The Epoch Times. She holds a master's in newspaper journalism from City, University of London.
View profile
Follow
and Steve Lance

The U.S. economy could soon be in a state of “stagflation,” an expert warned, blaming the Biden administration’s “enormous” spending on the skyrocketing national inflation, amid growing fears of a recession.

“There are increasing fears on Wall Street that we may be headed for a recession,” Peter St. Onge, a research fellow in economic policy at The Heritage Foundation, told NTD’s Capitol Report on April 12. “Really, the enormous spending over these past couple of years has sort of painted the Fed [Federal Reserve] into a corner, where they are running up against this historic inflation.”

Last month, U.S. inflation accelerated to an 8.5 percent annual rate. Some economists believe that regaining control of prices will require far more aggressive rate hikes by the Federal Reserve, which may topple the U.S. economy into a recession.

In May and June, the Federal Reserve is expected to deliver two back-to-back half-point interest rate hikes to tackle runaway inflation, according to economists polled by Reuters who also say the probability of a recession next year is 40 percent.

“There’s some concern that if they [the Federal Reserve] try to fight that [rising inflation] too aggressively, then they might end up sending the economy into recession,” explained St. Onge. “And indeed, if that were to happen, we’d actually be looking at stagflation at this point, both inflation and a slowing economy.”

St. Onge said that the root cause of skyrocketing inflation in the United States is largely coming from government spending.

“There was a new report out of the Federal Reserve that was saying this is not COVID-19. Supply chains are actually relatively a small part of it. This is overwhelmingly coming from government spending,” he said.

“And then the Federal Reserve accommodated that by really flooding markets with money. So, the [Biden] administration so far has really been sort of looking for excuses to spend more trillions—those new trillions are going to drive up inflation in the short run.

“It is possible they may do something in the long run, you know that they may ease pressures a decade down the line, but certainly in the short run, all of that spending is likely to make things even worse,” St. Onge added.

According to a Bloomberg survey conducted between March 29 and April 1, nearly half of investors expect the U.S. economy to fall into recession next year. About 21 percent of those polled believe the next recession will occur in 2024, while only 15 percent predict it will occur this year.