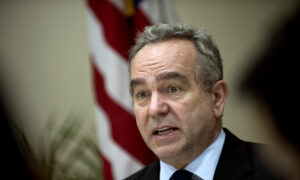 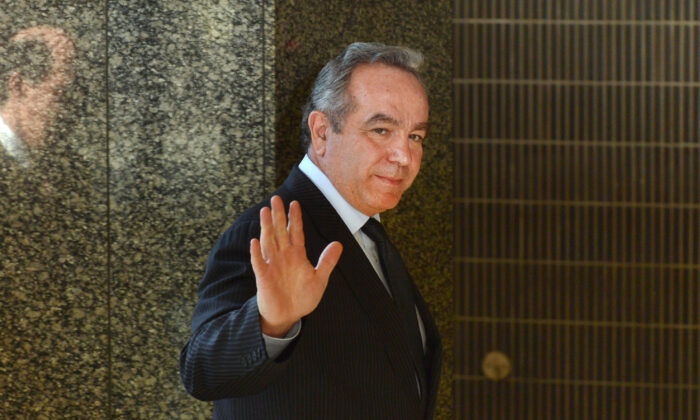 Then Assistant Secretary of State for East Asian and Pacific Affairs Kurt Campbell waves as he arrives at the Foreign Ministry to meet with Japanese officials in Tokyo on Jan. 17, 2013. (Kazuhiro Nogi/AFP via Getty Images)
US-China Relations

“The period that was broadly described as engagements has come to an end,” Campbell said at an event hosted by Stanford University on May 26. He added that the United States has now embarked on a “new set of strategic parameters” in regards to China, and that “the dominant paradigm is going to be competition.”

Campbell’s comments came the same day that President Joe Biden ordered intelligence agents to “redouble” their efforts in finding the origin of the virus—a move that met with protest from Beijing.

Campbell like many Biden cabinet officials had served in the Obama administration, noted Chen Weijian, editor-in-chief of New Zealand-based Beijing Spring magazine that focuses on democracy activism in China. Campbell’s strategy had been to both cooperate and compete with China, which appeared to him as no different from the Obama era policies, he said.

“A politician normally would not casually change the policy they had mapped out,” Chen told The Epoch Times.

But according to Chen, it appears that “the larger trend is more powerful than human will.”

“The entire international society is changing. It is reflecting on the past policies toward the CCP,” he said, noting the European Union’s suspension of its China trade deal and a number of recent U.S. measures designed to counter Beijing given the regime’s abuses against the Chinese people and other ethnicities living in China.

For nearly half of a century, Washington has pursued a policy of engagement with the CCP, ever since former President Richard Nixon visited China in 1972. Such policy was determined a failure under the Trump administration. Former Secretary of State Pompeo said in July last year that the policy had not “brought the kind of changes inside of China that President Nixon had hoped to induce.”

“The old paradigm of blind engagement with China simply won’t get it done. We must not continue it and we must not return to it,” Pompeo said in his speech at the Richard Nixon Presidential Library and Museum in California.

Now, the Chinese regime is pushing its “hard power” in many areas, such as its “economic campaign” against Australia, taking a confrontational diplomatic stance with partner countries known as “wolf warrior diplomacy,” military clashes at the Sino-India border, and military aggression in the South China Sea and against Taiwan, according to Campbell.

Campbell named Chinese leader Xi Jinping, whom he described as “deeply ideological but actually quite unsentimental,” as someone pushing the CCP to “play a more assertive role” around the world.

Chen said that the CCP’s pandemic coverup may have significantly contributed to the changing U.S. sentiment.

Calls for a new and deeper investigation into the virus origin have been growing among both U.S. political circles and scientists, amid fresh evidence that lend credibility to the virus lab leak theory.

“If this virus really leaked out of the Wuhan virus lab, yet the CCP denied it and concealed it … how would it be possible to carry on with the cooperation-competition policy as before?” Chen asked.

The United States, Campbell said, is looking to convene an in-person meeting with Quad countries—Australia, India, and Japan—to address the infrastructure challenge from China’s red regime. He said the Quad efforts were to invigorate the “operating system” that a freedom-loving America has helped build in Asia, which has come “under substantial strain” owing to rising communist Chinese influence.

The Belt and Road Initiative, also known as the OBOR or BRI, is the regime’s multi-trillion-dollar infrastructure scheme launched in 2013 to expand its trade and political influence throughout Asia, Africa, and Europe.

Chen said to counter the BRI now would be the right time. “BRI is the CCP’s biggest card these years in foreign policy,” he said. With many projects unfinished and countries trapped in debt, it will be more challenging for the BRI to be sustainable, he said.

In a press conference on May 27, Zhao Lijian, a Chinese foreign ministry spokesperson, called Campbell’s remarks a U.S. move “to exclude and contain China in the name of competition” and a “zero-sum game mentality.”

“The CCP has told Chinese commoners that America is their number one enemy,” he said. “Now, they realize the situation is not going well for them, they brought those [arguments] back again … it’s getting old.”

Luo Yua contributed to the article.