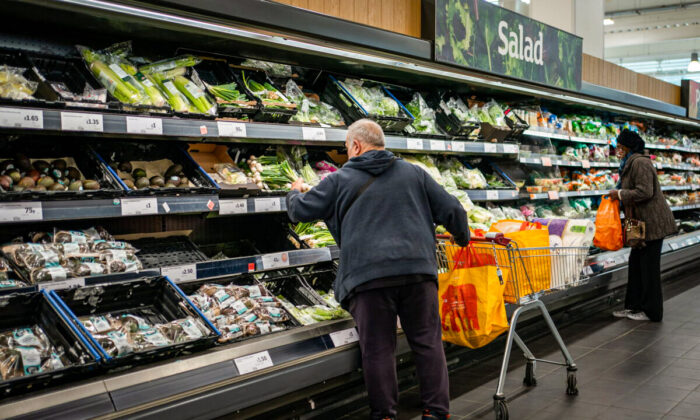 U.S. consumer spending rose by 2.1 percent in January, despite mounting price pressures, annual inflation rates at a 40-year high, and while Americans have dealt with the spread of the Omicron coronavirus variant, according to the Feb. 25 report by the Bureau of Economic Analysis.

The numbers are a major improvement from December 2021, as spending bounced back from a revised 0.8 percent decline at the end of the year.

The recent data shows that the U.S. economy is starting 2022 on solid footing, with employers adding 467,000 jobs in January and retail sales rising to a seasonally adjusted 3.8 percent from December 2021.

Personal income was unchanged for the month, following the expiration of the federal government’s monthly child tax credit, offsetting a 0.5 percent increase in wages.

Consumer spending is being supported by massive savings and strong wage growth amid a tightening labor market, which offset January’s reduction in government subsidies to households. Actual consumer spending rebounded by 1.5 percent in January, with numbers adjusted for inflation.

Spending was led by purchases of vehicles, nondurable goods, and recreational goods, as well as outlays on heating amid freezing temperatures across parts of the country.

However, rising inflation is making consumers think twice about leaving their homes or making big purchases. But economists remain optimistic that consumer spending will rise in 2022 as the fear of the COVID-19 pandemic fades and households spend their accumulated savings.

Rising household expenditures this quarter could be pointing to signs of faster economic growth, as consumer spending accounts for roughly two-thirds of the U.S. economy.

The Personal Consumption Expenditures Price Index (PCE), which the agency uses to measure inflation, rose by 6.1 percent in January. The boost was the largest rise since February 1982 and followed a 5.8 percent year-on-year increase in December 2021. Excluding the volatile food and energy components, the PCE price index soared by 0.5 percent after rising by 0.5 percent in December 2021.

The core PCE price index shot up 5.2 percent year-on-year in January, the largest rise since April 1983, after an increase of 4.9 percent in the 12 months through December 2021.

The Commerce Department gave further indication of a boost to the economy, with a Feb. 25 report showing that orders for nondefense capital goods, excluding aircraft—widely seen as a good forecast for growth—jumped by 0.9 percent in January.

Orders for core capital goods increased by 0.4 percent in December 2021, below an earlier forecast of a 0.5 percent rise in such orders.

Shipments of core capital goods, which are used to calculate equipment spending in gross domestic product (GDP) measurements, accelerated by 1.9 percent in January after increasing by 1.6 percent in December 2021.

Business spending on equipment rebounded in the fourth quarter after being hampered by automobile shortages in the third quarter because of the global shortage of semiconductors used in vehicle production. Car and truck orders fell by 0.4 percent after increasing by 1.8 percent in December 2021.

Orders for civilian aircraft increased by 15.6 percent in January after rising 23.9 percent in December 2021.

Orders of durable goods, items that last three years or more, such as aircraft and toasters, went up by 1.6 percent last January after rising by 1.2 percent in December 2021, boosted by a 3.4 percent increase in orders for transportation equipment, which followed a 1.7 percent rise in December 2021.

However, the threat of an extended conflict in Ukraine is causing disruptions in global energy markets and may further push U.S. gasoline prices upward.

The recent U.S. and European sanctions on Russia over its invasion of Ukraine are affecting fuel prices worldwide amid uncertainty over supply. The Nordstream 2 pipeline project connecting Germany and Russia to deliver natural gas to Europe has also been suspended for the time being.

On Feb. 24, for the first time in almost eight years, Brent crude oil prices, the international benchmark, rose to more than $100 per barrel, before retreating to about $98.70 per barrel on Feb. 25 because of the Ukrainian conflict.

Inflation, which is already well above the Federal Reserve’s 2 percent target, could continue to increase because of the crisis in Ukraine.

January’s positive core capital goods report may be a sign that the U.S. economy could maintain its expansion as the Fed starts raising interest rates in March to quell inflation and provide a financial buffer from the conflict overseas.

The first rate hike from the central bank is expected in March and may be the first of up to seven predicted rate increases in 2022.