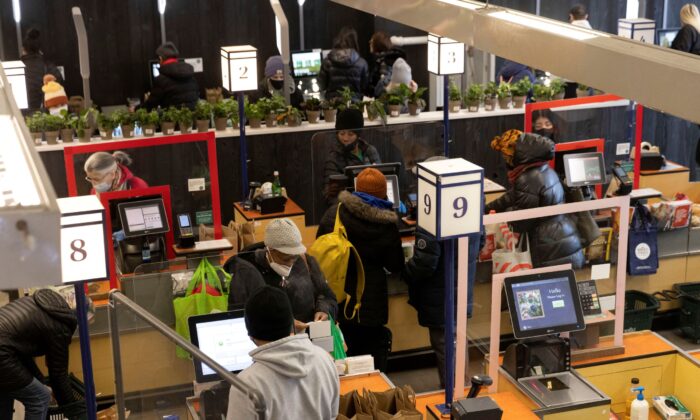 People pay for their purchases at a supermarket in New York, on March 28, 2022. (Andrew Kelly/Reuters)
Inflation

An inflation measure closely tracked by the Federal Reserve hit a 40-year-high.

The PCE price index shot up 0.9 percent in March, the largest increase since September 2005, after climbing 0.5 percent in February.

The index, when not factoring in food and energy, rose 5.2 percent, a slightly smaller increase than 5.3 percent a month ago.

Inflation is expected to remain uncomfortably high for the unforeseeable future.

The largest surge in monthly inflation rates since 2005, which overshot the Fed’s 2 percent rate, has pushed the Federal Reserve into an aggressive stance, with an expected hike in interest rates by 50 basis points next week.

Meanwhile, inflation in the service industry has gone up across the board, led by international travel, as well as dining and hotel accommodations, as consumers focus on recreation.

There was also an increase in health care spending and transportation services.

American consumer spending did better than expected in March, increasing by 1.1 percent amid strong demand for services, according to the Commerce Department on April 29.

Economists are hopeful that the signs of positive consumer spending heading into the second quarter will offset fears of a recession, after the economy contracted in the first quarter.

Consumers are spending more on services like travel and dining. The rising cost of gasoline and food was offset by less spending on durable goods, which fell for the second month in a row, with fewer vehicle purchases and parts.

A shift in spending from goods to services is seen as a sign of easing pressure on supply chains.

Personal income climbed 0.5 percent, an estimated $107.2 billion, from the previous month, but was a slower rise than the 0.9 increase in overall inflation in March.

The savings rate fell to 6.2 percent in March, the lowest in nine years, as some Americans tapped into their savings to offset inflated prices of goods.

Other data from April 29 showed worker compensation hitting its largest increase in at least 21 years of 1.4 percent in the first quarter, as companies boost wages in a bid to keep or attract workers in a scarce labor market.

The unemployment rate was at 3.6 percent in March as salaries grew, but in an ominous sign for the Biden administration, U.S. GDP contracted at a 1.4 percent annual rate in the first quarter of 2022.

One of the main causes includes a widening of the trade deficit, due to high domestic demand for imports and inventory issues with companies.

The Labor Department on April 29 released its separate Employment Cost Index (ECI), which takes into account labor costs. The index jumped 1.4 percent in the first quarter after a 1 percent increase in the fourth quarter of 2021, which was the largest increase since data was recorded in 2001.

Labor costs climbed 4.5 percent on a year-on-year basis after jumping 4 percent in the fourth quarter, another record high.

The ECI is widely used by policymakers and economists to measure labor market data and is an important predictor of core inflation.

The labor market is at near maximum employment, with a record 11.3 million job openings at the end of February.

High inflation eroded the 1.2 percent gains in wages and salaries in the last quarter, which rose 1 percent in the fourth quarter, up 4.7 percent year-on-year.

Inflation-adjusted wages fell 3.6 percent year on year, while benefits went up by 1.8 percent after increasing 0.9 percent in the fourth quarter of 2021.

The disappointing numbers are beginning to dim things in Washington for Biden and the Democrats running for Congress in the midterms, with public opinion being negative on rising inflation.

The president has repeatedly touted his administration’s economic policies by pointing to job market growth and solid consumer spending as evidence that his policies have helped Americans, but the 1.4 percent contraction of the economy has not helped.