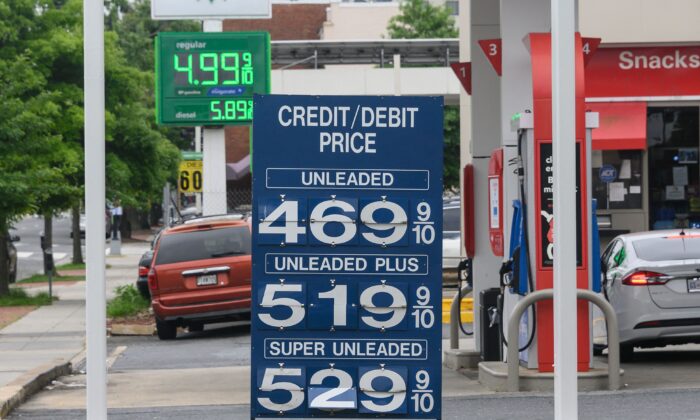 Gasoline prices are posted at a gas station in Washington, on May 26, 2022. (Nicholas Kamm/AFP via Getty Images)
Economy

The final May edition of the University of Michigan’s Sentiment Survey, which was released on May 27, delivered even worse results than the preliminary May data with a further drop in consumer sentiment.

The index fell from 65.2 in April to 59.1 in the initial May report to 58.4 in the final—the lowest level since August 2011—as consumers express more economic pessimism due to rising prices.

The final reading confirmed the early reports showing a decline in consumer sentiment in May, falling 10.4 percent from April and moving back down below March’s reading of 59.4.

The current condition index fell to a 13-year low of 63.3 in May from 69.4 in April, while future expectations dropped to 55.2 from 62.5 in the previous month, respectively.

The plunge in the buying condition index for May was led by home buyers and durable goods, due to inflation and higher interest rates.

Many of the gains made at the start of 2022 have been erased by soaring prices.

The price of oil and other key commodities has been rising in the past years but has been exacerbated by the Russian invasion of Ukraine and the sanctions regime imposed on Russia, while recent lockdowns in China have stressed global supply chains, contributing to levels of inflation not seen since the early 1980s.

Consumer expectations for overall inflation over the next year fell from 5.4 percent in March and April to 5.3 percent in May.

Those surveyed also expect prices to climb at an annual rate of 3 percent over the next five to 10 years.

The Federal Reserve’s favored weathervane, the Bureau of Economic Analysis’ Personal Consumption Price Index, or PCE, was released the same day, showing prices for a typical basket of consumer goods up 6.3 percent, year-over-year in April to its February level and down from its 6.6 percent high in March.

Inflation in the United States rose just 0.2 percent in April to mark the smallest increase in a year and a half, aided by a slight dip in gas prices, but which have now since increased.

Meanwhile, the Bureau of Labor Statistics’ Consumer Price Index was up by 8.3 percent from April last year.

The Fed has started to move quickly to raise interest rates from near zero to curtail growing inflation, but the resulting increase in interest rates on car loans, mortgages, and business lending is beginning to slow the economy.

While many economists are skeptical, central bank policymakers believe that they can bring down inflation without triggering a recession.

It is still unknown if or when inflation rates will begin petering out to more manageable levels.

However, consumers surveyed were less pessimistic about the future of their personal finances than over business conditions, with less than one-quarter of consumers expecting to be worse off financially a year from now.

“Looking into the long term, a majority of consumers expected their financial situation to improve over the next five years; this share is essentially unchanged during 2022. A stable outlook for personal finances may currently support consumer spending,” according to the report.

“Still, persistently negative views of the economy may come to dominate personal factors in influencing consumer behavior in the future,” the report concluded.