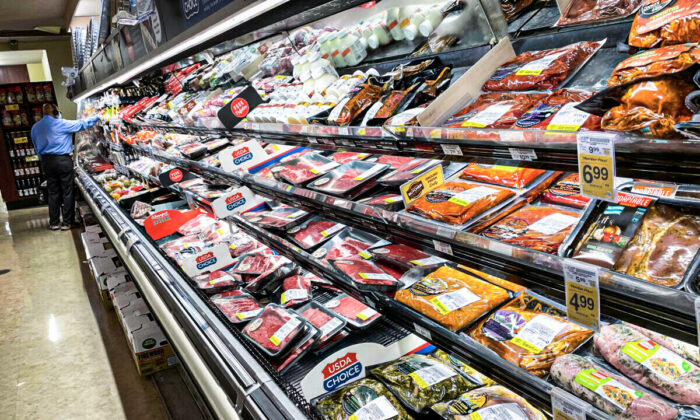 A customer shops for meat at a Safeway store in San Francisco, Calif., on Oct. 4, 2021. (Justin Sullivan/Getty Images)
Markets

US Consumer Sentiment Hits Lowest Point in Over a Decade

U.S. consumer sentiment has fallen to its lowest level in almost 11 years, amid a surge in gasoline prices and overall concern about the economy’s future.

The consumer sentiment index fell to 59.7 this month, which is almost a 5 percent month-on-month decline from February’s 62.8 value, and a decline of 29.7 percent when compared to 84.9 a year ago.

The survey attributed the decline in consumer sentiment to falling inflation-adjusted incomes, driven by a hike in fuel prices that has been exacerbated because of the Russia–Ukraine conflict. The expected inflation rate for 2022 has reached its highest level since 1981, while expected gas prices recorded their largest monthly upsurge in multiple decades.

The University of Michigan report also presented the preliminary March result for the Current Economic Conditions Index at 67.8, down 27 percent year-over-year. The index of consumer expectations was at 54.4, a decline of 31.7 percent from March 2021.

Inflation and the Russia–Ukraine situation is the “greatest source of uncertainty,” according to the survey. When questioned about the present economic outlook, “24 percent of all respondents spontaneously mentioned the Ukraine invasion.”

The relationship between consumer sentiment and spending is “loose,” especially in the short term, according to Scott Hoyt, a senior economist at Moody’s Analytics. According to Hoyt, there were more important factors such as real disposable income along with other determinants of household finances and budgets.

However, economist Peter Schiff took a gloomy view of the University of Michigan data.

“The Mar. Univ. of Mich. Sentiment Index ‘unexpectedly’ plunged to 59.7, its lowest level since 2011. Worse one-year #inflation expectations hit 5.4 percent, the highest since Dec. 1981. Imagine how much gloomier consumers would be if they realized inflation will actually be much higher!” Schiff wrote on Twitter.

U.S. inflation rose by 7.9 percent in February year-over-year, the fastest such pace in four decades. Treasury Secretary Janet Yellen, who had earlier predicted inflation to ease during the second half of 2022, now foresees another year of “uncomfortably high” 12-month inflation numbers.

Although income growth is strong, it hasn’t kept pace with rising inflation, according to a report (pdf) published by Moody’s on March 10. Inflation-adjusted income has grown for almost every month, but real income has been falling since the middle of 2021. This decline has intensified over the past months as inflation also rose.

“Current trends suggest the gap between real and nominal income growth will widen further for at least another few months, and potentially longer,” the report reads.