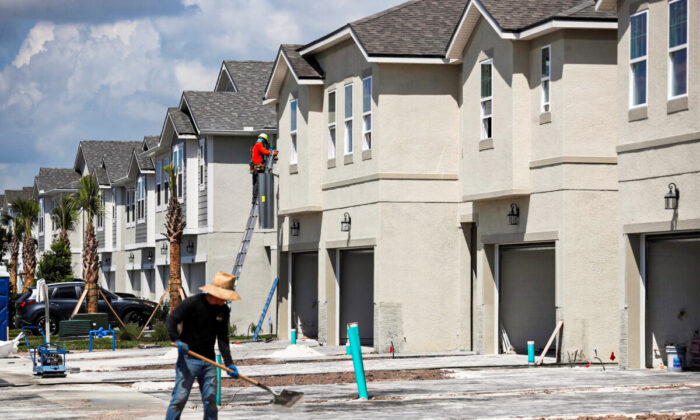 Homes under construction in Tampa, Fla., on May 5, 2021. (Octavio Jones/Reuters)
Economy

The Commerce Department’s Jan. 3 report announced that total construction spending rose 0.4 percent in November 2021 at a seasonally adjusted annual rate of $1,625.9 billion, amid strong gains in single family home construction after a similar upswing in October.

Spending in October was revised by the Commerce Department up to 0.4 percent at $1,618.8 billion, from the prior estimate of 0.2 percent.

Private construction project expenditures rose at a seasonally adjusted annual rate of 0.6 percent to $1,273.6 billion, with outlays on residential construction ticking up 0.9 percent at $796.3 billion.

Residential investments in mid-2021 had been weighed down by a decrease in home improvements and single-family homebuilding, due to home construction being constrained by material shortages, which had pushed up the prices of building materials.

Investments in residential properties had suffered two continuous quarterly losses, with home investments contracting in the third quarter of 2021.

Demand for residential housing had shot up at the start of the pandemic in 2020, as Americans fled from urban areas to less densely populated areas in a hunt for larger homes to accommodate their families and to work remotely from home.

The market cooled off in the first half of 2021 as limited housing stock combined with a double-digit growth in home prices had lifted prices beyond the reach of many potential buyers.

Pending home sales contracts fell 2.2 percent in November, about 2.7 percent lower compared with the same month in 2020, according to a report from The National Association of Realtors on Dec. 29.

However, the combined annual sales rate of new and existing homes in the United States reached 7.2 million units in November, the highest since January.

Non-residential private construction remained flat, according to the report, but was up 3.4 percent over the past year.

Investments in construction projects, such as gas and oil well drilling, went up 0.1 percent to $477.3 billion.

Spending on commercial structures declined for a second straight quarter in the third quarter, led by office construction, which had declined by 32.1 percent over the past 12 months, as employers retreated from large-scale return-to-office plans to the rise in CCP (Chinese Communist Party) virus variants.

Spending on public construction projects fell 0.2 percent to $352.3 billion in November, with an overall decline of 0.9 percent over the past 12 months.

The surge in the Delta and Omicron variants may affect the performance of the housing market going into 2022, as buyers and sellers are sidelined with home construction being delayed.