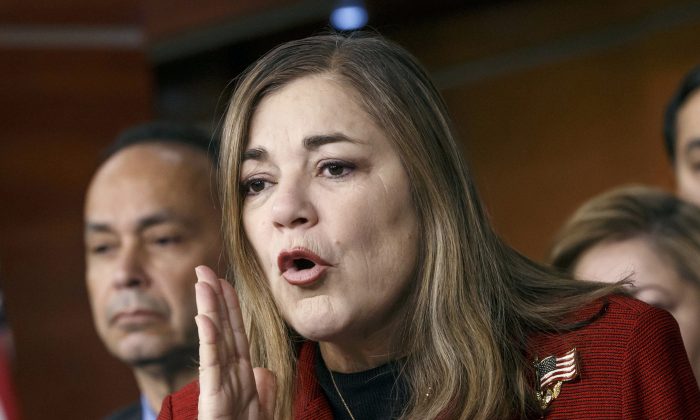 US Congresswomen, Other Officials Denounce Cancellation of Shen Yun in Seoul Over Chinese Embassy Threat

A recent South Korean court order cancelling a series of classical music and dance performances due to pressure from China has caused concern among human rights advocates around the world, including U.S. Congress member and co-chair of the Congressional Caucus of Korea, Rep. Loretta Sanchez of California’s 46th District.

“Censorship and stifling artistic expression are clear infringements on freedom of speech,” said Rep. Sanchez, who is also a member of the Congressional Human Rights Caucus and the most senior female member of the House Committee on Homeland Security, in a written statement.

“Shen Yun has a right to perform and I condemn any censorship on artistic expression. I am gravely concerned by China’s interference in an artistic performance in South Korea. This is an unacceptable and gross overreach.”

Shen Yun has a right to perform and I condemn any censorship on artistic expression. I am gravely concerned by China’s interference in an artistic performance in South Korea. This is an unacceptable and gross overreach.
— Rep. Loretta Sanchez (D-Calif.)

The May 4 decision in Seoul cancelled four sold-out performances of New York-based Shen Yun Performing Arts, scheduled to take place that following weekend. The ruling cited fears by theater owner Korea Broadcasting System (KBS) of losing business with China and revealed that the Embassy of the People’s Republic of China had sent at least two letters to KBS containing “thinly veiled threats” of that nature, according to a press release by Shen Yun.

KBS produces Korean television dramas that are popular in China. Court documents showed the company estimated millions of dollars in losses per year if it could not export this broadcasting to the mainland.

Ironically, the judgment was issued by the same court that had ordered KBS to allow Shen Yun to perform in a ruling two weeks earlier. KBS had originally cancelled the theater rental for Shen Yun at KBS Hall in Seoul after the contract had already been signed.

“The new ruling was announced half an hour before all administrative offices, courts, embassies, and theaters went on a national holiday, which, when combined with the subsequent weekend, extends until after the scheduled performances are over,” said the Shen Yun press release.

Shen Yun is the world’s premiere classical Chinese dance and music company, founded in 2006 with the mission of reviving the authentic, divinely inspired culture of China, which has been nearly lost in China today. Four companies tour the globe each year, bringing stories and legends to life on stage from ancient, and occasionally modern Chinese history.

It is this modern history that seems to have upset the Chinese regime. A Shen Yun performance typically portrays scenes of the persecution of spiritual and religious practices in China, such as Buddhism during the Cultural Revolution and the meditation practice Falun Gong today.

Because of this clear display of events the Chinese regime seeks to hide, Shen Yun has become a target of the Chinese Communist Party (CCP). Shen Yun has reported dozens of incidents of harassment, threats, and website attacks. The tires of a Shen Yun tour bus in eastern Canada were even found slashed just deep enough to explode at high speeds, fortunately discovered before the bus left for its destination.

“Shen Yun is a respected world-class international performing arts group based in America, yet has been subject to a troubling pattern of harassment from Beijing,” said Rep. Sanchez, who is now running for the U.S. Senate. “I strongly condemn the Chinese government’s consistent attempts to prevent Shen Yun from performing around the world, through tactics like threatening foreign theaters and foreign government officials.”

Another U.S. Congresswoman, Grace Napolitano of the 32nd District of California, and other officials and scholars agreed that the CCP and the South Korean court were out of line.

“It’s unfortunate that they get into the arts that give so much joy to people and express the true nature of all culture,” said Rep. Napolitano. “It should be shown. It’s just unbelievable they would not want them to perform regardless of the political influences.”

“If we’re going to stand for freedom and defend our allies, we must have shared values, and shared values have to start with freedom of expression, freedom of speech, artistic freedom,” said Dennis Halpin, a visiting scholar at the U.S.-Korea Institute at the School of Advanced International Studies and former senior professional staff member for the U.S. Congress Foreign Affairs Committee. “I understand the South Korean constitution guarantees freedom of speech. This should be the basis for a court decision.”

“It’s regrettable that the Seoul Korean government was pressured by China to stop this really important cultural presentation on the basis of a threat with respect to commerce,” said Canadian Senator Don Meredith. “I am quite shocked and dismayed that this would have continued in this 21st century. … I think in the future that all countries should not capitulate to idle threats, with respect to what they believe. I think they should stand up for that and ensure that these kind of cultural festivals do go on.”

Shen Yun recently completed 31 sold out or nearly sold out performances in the Greater Los Angeles area, Bakersfield, and Santa Barbara. Three of those performances were added due to strong local demand. Shen Yun Performing Arts was also welcomed by more than 100 federal, state, and local elected officials through proclamations, certificates, and congratulation letters.