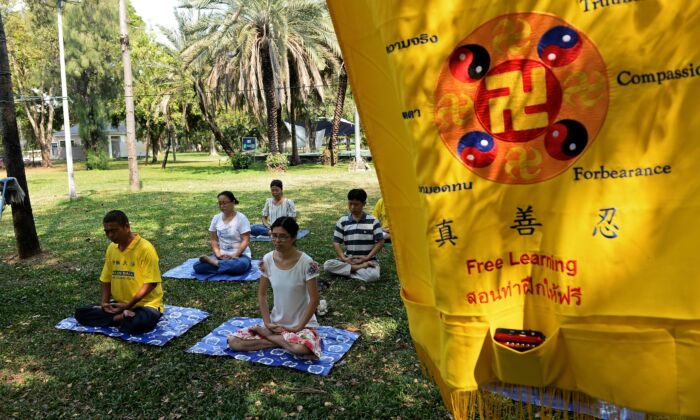 Leng and Ma were granted asylum by the U.N. High Commissioner for Refugees (UNHCR) in 2016. While waiting for UNCHR to arrange their resettlement in a third country, however, they were detained by Thai immigration police. They face possible deportation to China, where they had “suffered brutal torture and psychiatric abuse,” King warned in his letter.

Ma Chunling is from northeast China’s Jilin Province. In the 1990s, she attended college in Dalian, a coastal city in the bordering province of Liaoning, and settled there.

At the time, millions of Chinese were taking up Falun Gong, which incorporates meditation exercises with a body of teachings based in traditional faith and moral principles. Introduced to the practice in 1996 via a friend, Ma credits Falun Gong with curing her illnesses within weeks. Seeing the transformation, Ma’s entire family began to practice Falun Gong.

According to a Sept. 28 report by Minghui.org, a U.S.-based website that documents the persecution of Falun Gong, Leng Tao is from Sichuan Province. He was head of the tourism bureau in Aba, an autonomous prefecture home to people of the Tibetan and Qiang ethnic groups. Leng began practicing Falun Gong in 1995.

The persecution of Falun Gong began in July 1999 on orders of then-Communist Party leader Jiang Zemin. Like hundreds of thousands of fellow adherents, Ma and Leng were arrested in the early stages of the campaign when they stood out to protest Jiang’s policy.

Ma Chunling was arrested five times and held for over three years in total after she and her husband, who also suffered arrest, went to Beijing to petition the authorities. She was tortured during her detention. Ma’s last time in jail was spent in the infamous Masanjia Labor Camp in Liaoning Province, from which she was released in 2013.

Leng was arrested in 2001, after he and other practitioners had distributed hundreds of Falun Gong flyers and hung up banners in public areas. In detention, Leng was tortured with electric batons, forced to sit facing a light bulb for extended periods, and suffered burns to his face. According to his report, Zhou Yongkang, the former CCP head of Sichuan and later director of the powerful Political and Legal Affairs Commission until his 2014 purge, paid special attention to his case. When Leng escaped detention in April 2001, thousands of police officers were dispatched across the county to search for him.

In 2005, Leng was detained in the Sichuan Provincial Police General Hospital in Chengdu, the provincial capital. There, he witnessed the deaths of other practitioners that he suspects may have been linked to the Chinese regime’s practice of forced organ harvesting.

A group of Chinese Falun Gong practitioners who live in Thailand wrote in a letter: “When … released from the prison, Leng couldn’t walk because of the torture he suffered in the past ten years.”

“As a Falun Gong practitioner, Mr. Leng was arbitrarily detained many times, jailed for ten years, and suffered brutal torture and psychiatric abuse,” Rep. King wrote in his letter of petition to the U.N.

The UNHCR has accepted the asylum applications of both Ma Chunling and Leng Tao, who both escaped to Thailand. But their ordeals have continued even after leaving China, because the Thai authorities detained them for lacking proper visas.

Ma and her husband arrived in Bangkok with their teenage son in 2014, where they applied for asylum with the Thai authorities. On Aug. 21, 2016, UNHCR granted the family asylum.

Because Thailand did not ratify the U.N.’s 1951 Convention or the 1967 Protocol Relating to the Status of Refugees, approved asylees in Thailand are not afforded civil benefits and must be resettled in a third country by the U.N.

She said Ma and her husband were detained when they while talking to tourists about the persecution of Falun Gong in June 2017. Police said they didn’t have valid visas and therefore couldn’t remain in Thailand. The couple was only released upon paying 4,000 baht ($133).

Ma was again detained in February 2018, when Thai police stopped her and noted her lack of a visa. “She didn’t have money to pay the fine, and she was worried about her son at home who needed her help,” Chunmei explained, so Chunling fled after the officer made a record of her identity.

On Aug. 21, the prison guard didn’t release Chunling, but sent her to Bangkok immigration detention center. On Sept. 11, two people from the Chinese embassy tried to arrange Chunling’s extradition to China. She said she wouldn’t go back, since she had refugee status as granted by the U.N.

On Nov. 18, Chunling was moved to a different immigration detention center, located close to the Myanmar border. Chunling’s family is worried that she could soon be repatriated and incarcerated again.

“Two Chinese refugees Dong Guangping and Jiang Yefei were sent back to China from Thailand in 2015. They went straight to prison,” Chunmei said.

Leng Tao is in a similar bind. Despite his background as a former official whose decision to stand up for Falun Gong drew particular ire from the Communist Party, Leng faces possible deportation from Thailand.

The UNHCR approved Leng’s political asylum on March 9, 2016. He was awaiting resettlement when he was detained by Thai immigration officers on Nov. 7.

Maj. Gen. Chuchat Tharichat, deputy chief of the Thai Immigration Bureau, said at a press conference Leng was arrested for having overstayed his entry visa, which was only valid until April 20, 2014. Leng had arrived on Feb. 20 that year.

Leng’s landlord reported to police that Leng was renting his house and had, in line with the restrictions on his immigration status, not worked since he arrived in Thailand. The immigration bureau still decided to “detain him pending assistance from the UNHCR.”

In his letter, Rep. King urged the U.N. body to intervene in Leng and Ma’s detention, and expedite their resettlement to another state, lest they face further persecution upon their deportation to China.

Apart from Leng and Ma, another three Falun Gong practitioners—Li Hongjin, Jiang Hongbin, and Wang Jianhua—are detained in detention centers of the Thai immigration authorities. More than 100 other Falun Gong adherents from China are awaiting resettlement by the UNHCR.