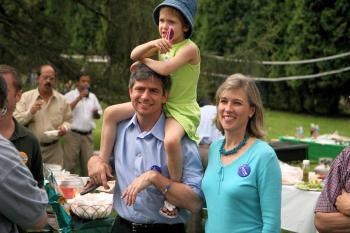 U.S. Congressman Joe Sestak with his wife Susan and daughter Alex. (Photo provided by office of Joe Sestak)
US

Congressman Sestak: US Strategic Center Is China, Not Iraq

By Pamela Tsai
Print
The two-day US China human rights talks on May 14-15 in Washington DC just ended, with a note of suspense. It was a closed-door dialogue. The persistent problems with China's human rights record remained in the quiet diplomacy arena.

Prior to the talks, U.S. Congressman Joe Sestak (D-Penn.) weighed in on America's handling of human rights issues in China:

"Quite frankly, it is very challenging," he said.

"China's record of labor rights abuses, controls on religious freedoms including the practice of Falun Gong, repression of ethnic minorities, and forced evictions is extensive. Of similar consequence have been China's ties to other human rights-abusing nations, such as Sudan, North Korea, and Burma."

Sestak pointed out that the US has allowed the problem to grow much bigger than what it has prepared itself for.

"China is becoming an economic powerhouse and it is much more complicated than the ex-Soviet Union, but where is our China Policy?"

Sestak attributed the ineffectiveness of human rights talks to a series of policy failures on China—such as the Bush Administration failing to put an adequate China policy in place, and the current administration lacking a "comprehensive strategy" on China.

Sestak told an Epoch Times reporter that he had been to China seven times and was among the first U.S. government officials to visit China in 1985. He began Chinese language education for his daughter when she was only four years old. "We want to prepare her for the future."

"Our Strategic Center is China, not Iraq," Sestak declared.

When asked about freedom for people living under repressive regimes such as that existing China, Sestak said although the U.S. has strong economic ties with China, "I don't believe that we need to sacrifice our standards and ideals in the process. Indeed, we can use our economic ties to continue to appropriately move China towards humanitarian reforms."

"We should never forget our obligation to promote the basic liberty of freedom of speech abroad," Sestak said.

Sestak voted for (and the House passed) the FY 2010 National Defense Authorization Act, which authorized $15 million to provide the dissemination of free information to the Iranian people through radio, television, Internet, and cellular telephone, and to develop anti-censorship software to counter efforts to block websites in Iran. He said he would continue to support such efforts in all countries including China.

A retired two-star Rear Admiral with 31 years service in the U.S. Navy, Sestak is the highest-ranking former military officer ever elected to Congress. He is currently a Democratic member of the U.S. House of Representatives, representing Pennsylvania's 7th congressional district since 2007. Sestak is in a race for a seat in the US Senate with Arlen Specter, a Republican-turned-Democrat incumbent who has had five Senate terms.

Congressman Sestak gave the interview this story is based on to several media, including The Epoch Times, on May 11. He also told reporters that more than ever Washington's system needs real leaders for America's working families, as opposed to career politicians.