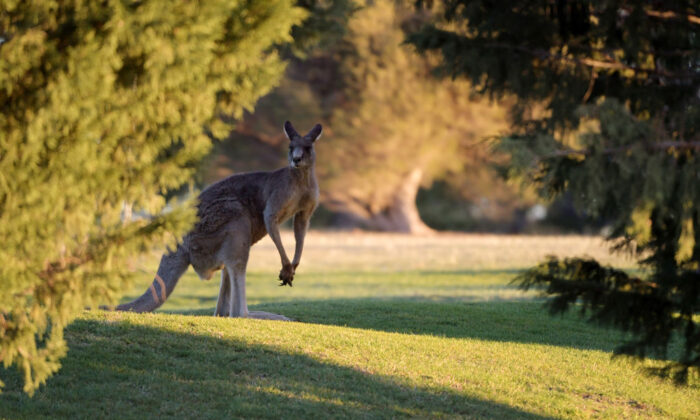 A Kangaroo jumps across a golf course in Canberra on October 28, 2019 in Canberra, Australia. (Tracey Nearmy/Getty Images)
Australia

Australian officials and diplomatic agents are pushing back against a bill proposed in the United States, which seeks to impose strict penalties on the importation of kangaroo leather or meat into America—the second-biggest buyer of kangaroo products after Europe—which generates $80 million per year in revenue.

The bill is being led by two congressmen, Salud Carbajal (D-California) and Brian Fitzpatrick (R-Pennsylvania) who introduced the “Kangaroo Protection Act” bill into the U.S. House of Representatives in January. So far six Democrats and two Republicans have sponsored the bill.

Animal rights groups, The Centre For the Humane Economy, Animal Wellness Action, and SPCA International are behind the push. They have launched a campaign called “Kangaroos Are Not Shoes,” with an aim to stop major shoe brands such as Nike and Adidas from using kangaroo leather in soccer shoes and bicycle cleats.

All of the species mentioned by the coalition are recognised as endangered species globally. The kangaroo, however, is not.

Currently, the Australian government estimates the total population of the four different species of kangaroo in Australia is close to 43 million, with female kangaroos producing one offspring annually. However, a female Kangaroo, called a flyer or a doe, can keep multiple embryos in a dormant state allowing her to have one at her feet, one in the pouch, and one held dormant.

Dennis King, the executive officer of Kangaroo Industries Association of Australia, told the Sydney Morning Herald the new bill is misguided and not based on fact.

King argued that kangaroos are far from being a threatened species and their population is so extensive that it needs to be controlled.

“Kangaroos may look cute and cuddly but they can do immense amounts of damage to farmers’ properties,” King said. “Even if there were no commercial industry, conservation culling would occur anyway to avoid overpopulation and mass starvation during droughts.”

Agriculture Minister David Littleproud has denounced the claims that culls are cruel as an abhorrent lie without basis in science.

Littleproud said the government had invited the congressmen to visit Australia to understand how the industry works and the reasons behind it.

“Come out and understand it, look at it and understand how these men and women drive this industry. The environmental opportunities are there if we look at this through the lens of science, not emotion,” he said.

However, Wayne Pacelle, the president of Centre for a Humane Economy, said Littleproud was wrong.

“Minister Littleproud claims animal cruelty is not acceptable,” he told AAP on Wednesday. “Has he seen the joeys’ heads being bludgeoned on the truck bumpers as called for in the official government guidelines?”

The word kangaroo comes from the Aboriginal word “gangarru” (pron. gung-ga-rroo), from the language of the Guugu Yimidhirr people of southeast Cape York Penninsula. It was noted during Captain James Cook’s travels, when his ship ran aground on the Great Barrier Reef off the coast of what is now known as Cooktown, in June 1770.