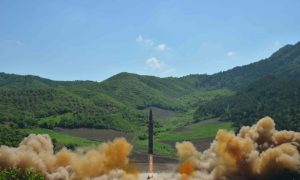 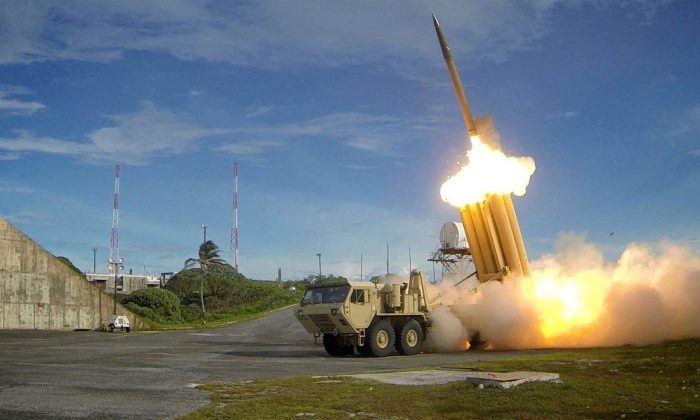 The test took place over the Pacific Ocean using a medium-range target ballistic missile (MRBM) that was air-launched by a U.S. Air Force C-17 aircraft.  The THAAD weapon system, located at Pacific Spaceport Complex in Kodiak, Alaska, detected, tracked, and intercepted the target, according to the Missile Defense Agency (MDA).

The MDA described the test as “successful.”

In a statement by MDA director Lt. Gen. Sam Greaves, he said the test will help the United States deal with “the evolving threat.”

“In addition to successfully intercepting the target, the data collected will allow MDA to enhance the THAAD weapon system, our modeling and simulation capabilities, and our ability to stay ahead of the evolving threat,” said Greaves.

The test comes after Gen. Terrence J. O’Shaughnessy, U.S. Pacific Air Forces commander recently said that the United States is prepared to use “rapid, lethal and overwhelming force,” against North Korea if necessary.

“They [China] do NOTHING for us with North Korea, just talk. We will no longer allow this to continue. China could easily solve this problem!”

…they do NOTHING for us with North Korea, just talk. We will no longer allow this to continue. China could easily solve this problem!

In the past, China has aligned itself with its communist neighbor, and together with Russia, blocked United Nations resolutions that sought to impose penalties on North Korea for its nuclear buildup and missile tests.

While Trump initially blamed China for not cooperating with the United States on North Korea, he seemed to strike a more conciliatory tone after meeting with Chinese leader Xi Jinping in April, conceding that the situation was more complex than he previously thought.

Xi has been on an anti-corruption campaign since he took office that some see as targeting those aligned with former Chinese leader Jiang Zemin, who forged close ties with North Korea’s leader during his time in office.

Trump seemed to recognize Xi’s effort at reining in it’s maverick neighbor when he tweeted June 20: “While I greatly appreciate the efforts of President Xi & China to help with North Korea, it has not worked out. At least I know China tried!”

U.S. analysts said the flight data from North Korea’s latest ICBM test revealed that more of the United States’s mainland was within the range of Pyongyang’s weapons, including Los Angeles and Chicago. Analysts believe the previous ICBM only had the range to reach Alaska.

O’Shaughnessy said that while diplomatic means are still the main focus in getting North Korea to comply with United Nations resolutions on nuclear disarmament, the United States still must plan for the worst.

This latest test from the United States was the 15th successful intercept in 15 tests for the THAAD weapon system, according to MDA.