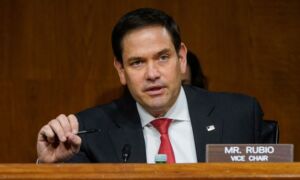 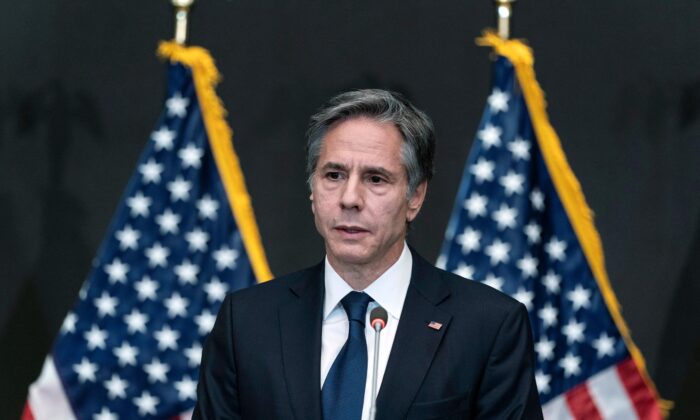 US Secretary of State Antony Blinken departs after gives a press conference in the Jordanian capital Amman, on May 26, 2021. (Alex Brandon/POOL/AFP via Getty Images)
US-China Relations

“Beijing’s attempts to intimidate and silence those speaking out for human rights and fundamental freedoms, including freedom of religion or belief, only draw additional international attention and scrutiny to its egregious abuses,” Blinken said in a statement on May 27, a day after the regime blacklisted a former U.S. Commission on International Religious Freedom (USCIRF) commissioner.

Blinken, elaborating on those abuses, pointed to “the ongoing crimes against humanity and genocide in Xinjiang, as well as its repression of religious and spiritual adherents, including Tibetan Buddhists, Christians, and Falun Gong practitioners.”

The May 26 sanction on Johnnie Moore, an evangelical pastor who has twice served on USCIRF, came after the State Department under the Biden administration punished the first Chinese official for his role in suppressing the meditation discipline Falun Gong.

It also made Moore the third USCIRF commissioner to be sanctioned under the regime’s tit-for-tat sanctions over China’s abuses of religious freedom.

The Chinese Communist Party (CCP), which is atheist, allows only five religions—Buddhism, Taoism, Islam, Catholicism, and Christianity—to exist under its tight state control. Adherents of the faith group Falun Gong, which had roughly 70 million to 100 million followers by the late 1990s, have lived under constant threats of detention, slave labor, and even organ harvesting since the regime began to persecute the practice in 1999. Experts have warned that the regime has refined its persecution tactics through the relentless campaign against Falun Gong and deployed those tactics on other religious minorities, such as the Uyghurs in Xinjiang Province.

The United States will continue to speak out for human rights, including those enshrined in the Universal Declaration of Human Rights, and promote accountability for the CCP’s abuses, Blinken said.

Moore told The Epoch Times he saw the sanction “as a badge of honor.”

“I referred to China as the world’s worst human rights violator, and it is—I don’t even think that the Communist Party in China denies that fact,” Moore said in an interview on Thursday. “They just somehow think it’s justified and that the rules of the world don’t apply to them.”

Moore suggested that he may have drawn the regime’s wrath for his efforts in advocating for persecuted religious groups in China. He had advised the Biden transition team back in January to make human rights a priority in China policy. He also “adopted” Hong Kong activist Jimmy Lai, a Christian and publisher of local newspaper Apple Daily who has been jailed for taking part in pro-democracy protests, through the Religious Prisoners of Conscience Project.

“If the cost of holding a Chinese official to account for grotesque human rights abuses is something like this, I more than welcome it,” he said.

“It will only draw more international attention to the atrocities and horrors being perpetrated by the Chinese government against the Uyghurs, Tibetan Buddhists, Christians, Falun Gong practitioners, and countless other Chinese citizens.”

USCIRF Vice Chair Tony Perkins, who was sanctioned by Beijing along with former Chair Gayle Manchin as well as Canadian, UK, and European officials over the Xinjiang row, congratulated Moore for joining “a growing list of government officials and human rights activists … who the brutal Chinese Communist regime has sanctioned for criticizing its oppressive policies and religious freedom violations.”

“We will continue to work unflinchingly with our international partners to hold the CCP accountable for its atrocious religious freedom violations,” Perkins said.